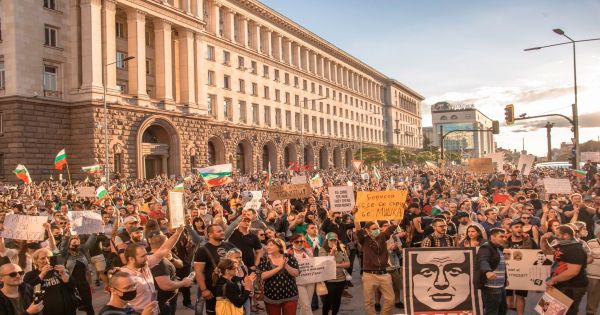 Bulgarian democracy in danger: open letter against the destruction of nature & rule of law

By continuing you agree to receive Avaaz emails. Our Privacy Policy will protect your data and explains how it can be used. You can unsubscribe at any time. If you are under 13 years of age in the USA or under 16 in the rest of the world, please get consent from a parent or guardian before proceeding.
This petition has been created by Maya S. and may not represent the views of the Avaaz community.
x

Sign this petition
Maya S.
started this petition to
The European leaders and European parliament
As Bulgarians, Europeans, and free people, we support the Bulgarian citizens marching in the streets and filling the squares of their cities to protest against the rampant corruption in the country.

Bulgaria is the poorest and most corrupt European country with endangered Rule of Law  and Freedom of Speech . Together with the millions of Bulgarians (approximately one third of the population) who have fled their country we demand the re-establishment of the Rule of Law, guaranteeing accountability on all levels of political power and public office, transparency and the deserved dignity of all those young people who want to live in Bulgaria.

We call on the European leaders to stand by us and to hold Bulgarian Prime Minister Boyko Borissov and the Chief Public Prosecutor, Ivan Geshev accountable for the current situation in Bulgaria:

We Support and Demand:

“ The truth cannot lead us in the wrong direction. Silence will certainly do it.” Christian Takoff (1965 – 2017), inspirational Bulgarian legal scholar, university professor and civil activist.

We support the Bright Side Generation in Bulgaria!

Today: Maya S. is counting on you

Maya S. needs your help with "Bulgarian democracy in danger: open letter against the destruction of nature & rule of law". Join Maya S. and 4,586 supporters today