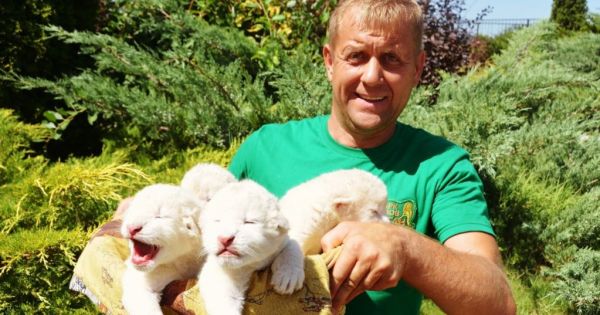 SAVE TAIGAN LION SAFARI PARK IN CRIMEA FROM ILLEGAL TAKEOVER

By continuing you agree to receive Avaaz emails. Our Privacy Policy will protect your data and explains how it can be used. You can unsubscribe at any time.
This petition has been created by Diana L. and may not represent the views of the Avaaz community.

Sign this petition
Diana L.
started this petition to
EUROPEAN UNION COMMISSION, THE UNITED NATIONS, HUMAN RIGHTS WATCH
Dear friends, I created this petition because numerous animal advocates all over the world cry out for your help in protecting the TAIGAN LION SAFARI PARK in Russia-controlled CRIMEA. The Park was recently closed for a period of 30 days with Mr. Aksionov, the GOVERNOR of CRIMEA, and Mr. IVANOV, the CHIEF OF CRIMEA`s VETERINARY INSPECTION standing behind the park`s closure.

TAIGAN LION SAFARI PARK houses the LARGEST collection in Europe of rare animals like lions including white lions and amur tigers as well as white tigers almost extinct in the wild while they give lavish offspring in TAIGAN. OLEG ZUBKOV, THE FOUNDER AND THE DIRECTOR OF THE PARK, replenishes the genetic fund of rare and exotic animals for our Planet and he should not be penalized BUT REWARDED for this. In total, OLEG and his staff have to care for and to feed around 3500 animals and birds. One month of closure means deprivation of the lions, the tigers and the other Park`s inhabitants of thousands of tons of food, lost profits for the owner and outrageous abuse of authority by the Crimean government. TOTAL ANNUAL EXPENDITURES FOR FOOD SUPPLIES COME UP TO 2.5 MILLION USD!

TAIGAN LION SAFARI PARK AND SKAZKA (Fairy Tale) Zoo are Oleg`s private OWNERSHIPS.  He created them from scratch, without any loans and subsidies from the state. He pays all taxes due to the budget while he should be tax exempt since all the money he gets through ticket sales goes to maintaining the park and feeding the animals as well as to financing new projects (a bear theme park to give bears saved from poachers and travelling circuses the possibility to live freely and tiger theme park). Unfortunately, neither bears nor tigers will happen to experience this joy because these people would not release to OLEG ZUBKOV some wasteland previously used for a mine and a dumpsite. Oleg was not asking for any funding, he was going to clean the sites and to construct the both parks entirely at his own expense. Just imagine the increase in the regional budget that this tourist attraction could bring, the children`s joy, educational benefit and the happiness of these majestic animals if it were not for the overwhelming greediness and criminal mindset of the mentioned individuals. Now the fate of all 40 bears is under the question of euthanisation unless a miracle happens or they are adopted. In case of their death, it will be on the conscience of those two and of OKSANA TUSHINA, another vet inspection`s character who generously assigned the fines specified below.

Until this day, OLEG has been defending himself in 560 (!) court hearings initiated by the Governor AKSIONOV and the Chief vet IVANOV for all sorts of absurd claims. These claims would not be even worth mentioning if they were not the cause for skyrocketing fines: around $7,985.00US for each insignificant instance. One of them was a piece of meat left by a lion in the savannah and qualified by OKSANA TUSHINA as a bio waste. Following her logic, a piece of a leftover chicken in her plate that can be finished later is also a bio waste and she should be fined for around $8,000.00.  Sorry, lady, lions do not have fridges in the savannah. Another instance is totally hilarious: she saw a lion supposedly scratched by a lioness and ordered to locate him and the lioness and to give them both rabies shots. All the lions are vaccinated in the first place and they do not speak human in the second.

During the most recent hearing as of December the 3rd, 2019, the judge came up with a very biased decision to close up the Park and the local media provided for a very negative coverage in the news that damaged the reputation of OLEG ZUBKOV WORLDWIDE. THE JUDGE AND THE MEDIA ARE THE ACCOMPLICES IN THIS SCHEME AND MUST BE HELD LIABLE. THE TRUE GOAL UNDERLYING THE CLOSURE AND ALL THESE SKYROCKETING FINES IS NOT THE GENUINE DESIRE TO CORRECT THE SITUATION BUT TO MAKE OLEG ZUBKOV GO BANKRUPT, TO SEIZE HIS BUSINESS, MAKE IT STATE-OWNED AND HERE YOU GO, THEY WILL BE ABLE TO POCKET MONEY FLOWS COMING FROM THE GOVERNMENT SUBSIDIES.

If they succeed, it will have tragic consequences for the rare predators like lions and amur tigers, in the first place. In the best case scenario, they will be kept in tight cages with stale water and will lead miserable and hungry existence. In the worst-case scenario, they will become trophies of government big shots or oligarchs and their skins will decorate the floors and the walls of their palaces. BESIDES, JUST A FEW DAYS AGO THE RUSSIAN DUMA (PARLIAMENT) PASSED THE LAW ALLOWING TROPHY HUNTING IN ENCLOSURES! THIS MUST BE THE SUBJECT FOR ANOTHER PETITION.

I am seeking your active involvement because the Russian central government remains silent on the issue. This silence is especially appauling since we are dealing with the animals from the Red Record Book (under threat of extinction). However, these animals fall under INTERNATIONAL ANIMAL WELFARE LAW and are subject to PROTECTION by the INTERNATIONAL COMMUNITY. There is a wave of indignation of animal lovers rising in Russia and all over the world and your interference will create a resonance that will stop the raiders.

JUST A FEW WORDS ABOUT IVANOV, CHIEF VET INSPECTOR OF CRIMEA: HE SEIZED from OLEG a young amur tiger cub named ALTAI and kept him in pitiful conditions in a public zoo corner in Semphiropol in a tight cell with stale water. The tiger cub subsequently died as a result of unprofessionally administered injection. IVANOV is GUILTY of poor tiger ALTAI`s mistreatment, mishandling and death, as well as for the sufferings and death of numerous other animals. Information on all of his animal cruelty crimes will be provided upon demand. THAT WILL BE THE SUBJECT OF ANOTHER PETITION CALLING FOR JUSTICE FOR IVANOV FOR THE CRUELTY THE DEFUNT ANIMALS HAD SUFFERED THROUGH HIM!  Guess what, he is surprisingly still in office while he on no account should remain in it, nor should he be entitled to teach OLEG ZUBKOV how to take care of his animals.

If the Park gets taken over, it will be a blatant shame for Russia because TAIGAN PARK and SKAZKA ZOO are real pearls. The animals are kept in excellent conditions close to their natural habitat, they are well-taken care of, well-fed and they are LOVED. Oleg Zubkov established positive personal contact with almost all dangerous predators. OLEG feeds his lions from his hands and helps females to deliver their cubs who have entire trust in him. Have you ever seen anything like this? He was named the LIONMAN because  lions accepted him as the leader of their prides. All this must serve as a proof that Oleg is a good and caring lion master. It is the lowest and THE cruelest thing to close the Park and to leave animals and birds without the means of existence.

Please, STEP IN TO PROTECT TAIGAN PARK NOW!!!! DO NOT WALK PAST while the PARK, THEIR OWNER OLEG ZUBKOV, HIS BUSINESS AND HIS ANIMALS are being DESTROYED!!! OLEG is forced to run this rat race each day in courts, his health is deteriorating and if something happens to him, his animals will be doomed. After all, it is CHRISTMAS time, the time when we should lend a helping hand to those needy and suffering in the name of LOVE!