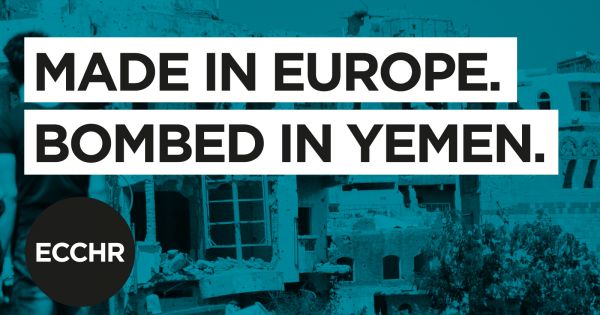 By continuing you agree to receive Avaaz emails. Our Privacy Policy will protect your data and explains how it can be used. You can unsubscribe at any time. If you are under 13 years of age in the USA or under 16 in the rest of the world, please get consent from a parent or guardian before proceeding.
This petition has been created by ECCHR E. and may not represent the views of the Avaaz community.
x

"We demand that you immediately issue legally binding export bans on arms trade with Saudi Arabia and the United Arab Emirates. European weaponry is actively being used by the Saudi-led military coalition against  civilians in its war on Yemen. The officials who licensed the exports and the corporate actors who carried them out must be criminally investigated. We demand that you fully support investigations at the level of the International Criminal Court."

European corporate complicity in war crimes is an outrage, but together we can put a stop to it. Support our call for a criminal investigation and demand your government ban these criminal exports now.

Thousands of civilians are being killed by indiscriminate attacks carried out by the Saudi-led coalition, which heavily relies on European-made fighter jets and weapons. They bomb the homes of innocent families, their hospitals and schools, and destroy centuries old cultural heritage sites.

Arms exporters and governments in Europe pretend that this has nothing to do with them. They deny their involvement, but they continue to profit through sales and continued servicing of arms to Saudi Arabia and the UAE, even providing the maintenance needed to keep the coalition’s fighter jets in the air.

All that could change if the Office of the Prosecutor at the International Criminal Court launched an investigation into corporate responsibility for war crimes in Yemen!

Sign the petition! Together, we can end morally corrupt and illegal arms exports!

Today: ECCHR E. is counting on you