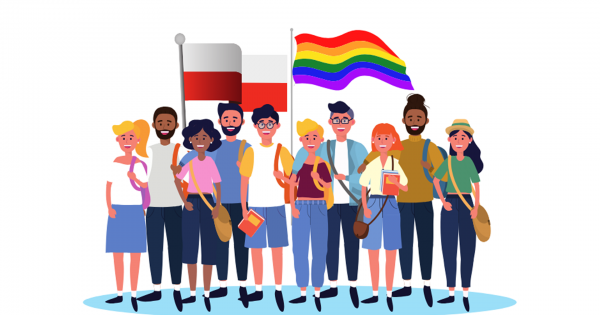 We want our University and Poland to be free from hate and homophobia!

By continuing you agree to receive Avaaz emails. Our Privacy Policy will protect your data and explains how it can be used. You can unsubscribe at any time. If you are under 13 years of age in the USA or under 16 in the rest of the world, please get consent from a parent or guardian before proceeding.
This petition has been created by Michał K. and may not represent the views of the Avaaz community.
x

Sign this petition
Michał K.
started this petition to
the President of the Republic of Poland, Polish minister of science and higher education
Students of the University of Silesia in Katowice, Poland, are being intimidated by the Polish police and Public Prosecutor’s office for defending their university rights and for taking a stand against homophobia and hatred. We can lend them the support they badly need to withstand the outrageous procedure undertaken by the police and Public Prosecutor’s office. We call upon Polish government to hear the voice of science and respect the scientific consensus instead of accepting dogmas under the pretext of the freedom of expression. In solidarity with LGBT+ people, we also strongly urge the President of the Republic of Poland to maintain the dignity of his office and to cease building his political campaign on abhorrent, divisive, and dehumanizing rhetoric directed against them. SUPPORT POLISH STUDENTS IN THEIR FIGHT AGAINST HOMOPHOBIA.

We express our solidarity with the students of the University of Silesia, who, acting in good faith and adhering to the rules and legal regulations of the University, asked the University authorities to take a stand in their dispute with the lecturer. Their actions, which did not breach any moral, legal or procedural standards, became a pretext for a political and media campaign of which they are now victims. It also resulted in the police and Public Prosecutor’s office taking action that is excessive in its scale, calculated to intimidate and have a chilling effect on the students. Ordo Iuris, a fundamentalist Catholic organization, now acts as a representative of the lecturer and takes part in the police hearings taking a dogmatic and ideological stand against the students.

[Below is the statement of the University of Silesia students in response to the intimidation which they experience from Ordo Iuris, a fundamentalist Catholic organization. This organization is known for its draft laws and actions aimed to stop abortion (described as “eugenic” and presented as a “form of killing children”), the so-called “gender” (described as a threat to the family) and sexual education (described as promoting the so-called “LGBT ideology”). Ordo Iuris also stands against legal means to prevent domestic violence, arguing that a family member who committed violence towards another family member only once cannot be recognized as perpetrator.]

We want our University to be free from hate!

We are third-year sociology students studying at the University of Silesia and we do not accept hatred at our university. Freedom of speech does not equal hate speech! For this reason we have decided to loudly say “no” to the lies filled with harmful prejudice which we could hear from our lecturer, Dr Ewa Budzyńska. And if this were to happen again, we would do the same, despite the repressions that we are now facing. We want our university to be free from hatred where everyone is treated with dignity and respect.

In 2018 we had classes with Dr Budzyńska. As our lecturer, she argued in class that abortion was murder, she stigmatized various religious groups and she told lies about children raised in LGBT+ families of choice. From Dr Budzyńska’s lectures we could learn that Muslim people come to Europe in order to rape women and that the media should report on rapists’ religious denominations so that people would see that it was mainly Muslims who engage in such acts. During her classes, we were also presented with unsubstantiated information about contraception – the lecturer claimed that the use of an intrauterine contraceptive device amounted to an abortion held every month by the person using it and that the children of women using IUDs would be born with antennas in their heads. Furthermore, Dr Budzyńska spoke of emergency contraception as equivalent to abortion itself. Her lectures were filled with homophobic content such as the claims that children raised by people of the same sex were always unhappy. She also warned boys not to “share their sperm” with lesbian couples. And these are just some of the absurdities we were forced to hear in our classes.

Because of the blatant abuse of Dr Budzyńska’s position as a university lecturer, in a group of 12 female and male students we decided to file a complaint against her with the university authorities. In line with the university procedures, the matter was being handled by the University of Silesia and the Student Ombudsman. Meanwhile, unbeknown to us, the police and the Public Prosecutor’s office were also involved in the case on the grounds of our alleged fabrication of false evidence which supported the motion for disciplinary action against Dr Budzyńska. Each of us received a subpoena requiring us to participate in police interrogations. As things stand now, one by one we are all being questioned by the police. Without necessary breaks and for many hours, in a highly stressful atmosphere, we are being interrogated about things that are unrelated to the case. Many of us have been asked over 70 questions, as if it were us who were the culprits in the case. We feel intimidated and we regard the hearings as a suggestion that our complaints were unfounded. Moreover, we perceive the pressure of the police hearings as an attempt to silence not only our group, but also younger generations of students. But we cannot be silenced, because we believe that every decent person should oppose the spreading of hatred.

For most of us, it was our first contact with the police. We were made to feel as though we were guilty. And yet it was us who took the side of the truth by not agreeing to slander Muslim people, women, and children. The pressure to take part in the interrogations affected our mental health and caused emotional trauma to one of us. At the first interrogation, we were not even accompanied by an attorney. Instead, we were being bombarded with questions by a representative of the fundamentalist circles associated with Ordo Iuris – an organization which supports Dr Ewa Budzyńska and acts as her legal representative both in the university disciplinary proceedings and those conducted by the Public Prosecutor’s office.It is not the first time that Ordo Iuris interferes with the activities of our University. They have already established a research circle at our University. It is an organization that interprets human rights in a very peculiar way, organizing lectures and workshops which present the content that contradicts scientific knowledge and is based on prejudice.

We perceive the interference of Ordo Iuris as an attack on the autonomy of universities, but also as an attempt to violate human rights. As students, we feel that the freedom of science and freedom of universities in Poland is under threat. We are being repressed for telling the truth and we are being manipulated and tormented during long hours of interrogation because we use our rights to stand up for those who are often denied any.

That is why we will continue to be vocal about what is happening at our University so that the world can hear us. Universities must remain free of prejudice The message based on disinformation and denial of scientific knowledge should not be disseminated within their walls.

Let us also remember that empirical and theoretical knowledge must be based on research conducted by means of appropriate standards, where reliability and a properly applied methodology are important. Academic freedom has never been about exerting emotional pressure on students and about imposing one’s personal views on them.

Today: Michał K. is counting on you

Michał K. needs your help with "We want our University and Poland to be free from hate and homophobia!". Join Michał K. and 1,972 supporters today