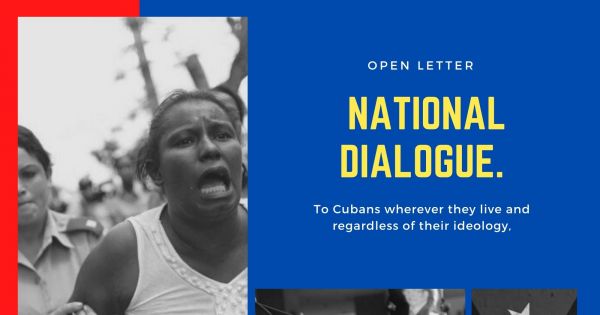 To Cubans wherever they live and regardless of their ideology

By continuing you agree to receive Avaaz emails. Our Privacy Policy will protect your data and explains how it can be used. You can unsubscribe at any time. If you are under 13 years of age in the USA or under 16 in the rest of the world, please get consent from a parent or guardian before proceeding.
This petition has been created by Yoandy C. and may not represent the views of the Avaaz community.
x

Sign this petition
Yoandy C.
started this petition to
This is about the need for a national dialogue
Open Letter

To Cubans wherever they live and regardless of their ideology, this is about the need for a national dialogue.
To international and human rights organizations.
To the democratic governments of the world.
To all free citizen.
1.   After sixty years of an established totalitarian communist dictatorship, the tensions within the island society are irreversibly aggravated.
2. In the last biennium, to the exhaustion due to the perennial crisis, it adds the lack of leadership of the group in power and the neglect of the serious problems accumulated in the country, such as: chronic underdevelopment, unemployment, food and medicine crises, unhealthy conditions and a constant uncertainty about the present and the future of the nation.
3. Faced with the visible signs of dysfunctionality and exhaustion of the state, outweighed, in addition to the absolute lack of freedoms, permanent violations of the Constitution and corruption at all levels, society is showing signs of anguish, discomfort and irritation.
4. Likewise, society has begun to draw attention in a perceptible way through different civic actions, protest and claim of more than 300 citizens, mostly young artists and intellectuals, asking the government to listen to their demands for freedom and solidarity with the San Isidro Movement strikers.
5. The response of the authorities has been to mobilize the military, paramilitary police and civilian troops against the citizenry; those of launching a campaign of disinformation, intimidation and murder of the reputation of intellectuals, artists, journalists and citizens willing to participate in a campaign of detente and respect for dissent.
6. The authorities use the current health situation as a tool for legal repression. This creates an ethical vacuum between public health and moral health in the state, which strengthens societal centrifugal tendencies.
7. In the last decade it has not been absent the constructive, creative and caring attitude of the international community, the United States of America, the European Union, Japan, several Latin American countries, the Paris Club and other transnational organizations , taking steps to eliminate tensions and create a positive climate inside and outside of Cuba.
8. Faced with all these actions by the citizens, Cuban civil society, and the international community, the state government, in contradiction with important institutional premises of the State, has only had as a response intransigence, intolerance, hatred and violence, and refusal to an inclusive dialogue from the national condition.
9. In this logic, the State tries to transfer the accumulated tensions in the interior of the island, to the international stage, blaming it for the drama that involves the entire nation. At the same time that it supports and stands in solidarity with its international allies, it demonizes the Cuban human rights and pro-democracy community when it comes to international support and solidarity.
For these reasons, independent journalists and other alternative groups of civil society speak out:
1. In favor of individual freedoms included in the United Nations Declaration of Human Rights, of which Cuba is a signatory, although the regime prohibits the circulation of this document in the country, as well as those reflected in the Cuban Constitution.
2. For a national dialogue and for profound reforms in all areas that leads to solving the structural problems of the country and the Cuban nation.
3. The accompaniment of international organizations and the international community to this effort by civil society. Facilitating dialogue and avoiding obstacles that may stop it.

Havana, December 10, 2020
Those signing bellow appreciate the dissemination of this letter on social networks and media at their disposal.