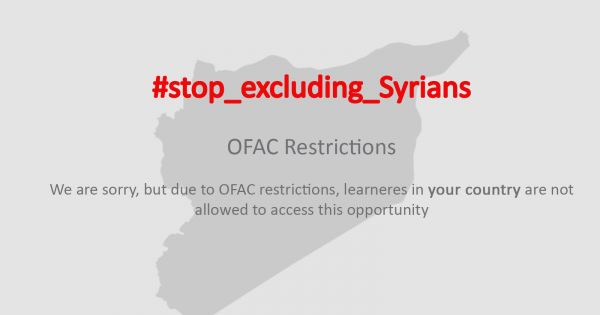 By continuing you agree to receive Avaaz emails. Our Privacy Policy will protect your data and explains how it can be used. You can unsubscribe at any time. If you are under 13 years of age in the USA or under 16 in the rest of the world, please get consent from a parent or guardian before proceeding.
This petition has been created by ريم م. and may not represent the views of the Avaaz community.
x

Sign this petition
ريم م.
started this petition to
US congress
Since the government of the United States considered Syria’s government as a terrorist-supporting government, sanctions have been implemented on the country. Sanctions were supposed to pressure the Syrian government to change its policies, without affecting the population of Syria.
Since the war in Syria started, sanctions have been reinforced. Affecting the lives of civilians and apparently without any changes to the situation or the governments’ policies.
While we are not discussing the effectiveness of the sanctions, we are also not discussing the policies of the Syrian government and are not asking to lift the sanctions. HOWEVER, late in 2018, Coursera (the biggest online education website) was banned in Syria due to OFAC sanctions. And this year, Duolingo (a language learning website) was also banned for Syrians inside Syria. As a result, a lot of Syrian students received emails that their Duolingo English test will not be certified due to the latest sanctions on Syria. The Duolingo English test was supposed to be a huge relief to many students around the world during the Covid-19 lockdown situation, as Syrian youths are not eligible for most of the opportunities out there due to their nationality.
Syrian students do not have access to the IELTS test in Syria, which is the most recognized test to prove English skills, and which is also a requirement for all scholarships and university admission around the world.
Education is the answer for a better future in Syria, yet it is the field affected most due to sanctions.
We are a group of Syrian activists and students. We are here to say ENOUGH!
In the Universal Declaration of Human Rights, article 26 starts with: “ Everyone has the right to education ”
After 9 years of war, we have lost a lot and it is time to stand up for ourselves. However, organizations around the world are just adapting to the new reality of excluding Syrians, which is killing our dreams to build a better future for us as Syrians.
No one can argue the fact that societies suffer after war. Therefore, youths from war countries need extra support and opportunities. Unfortunately, due to the US sanctions on Syria, the opposite is happening. The result of this is that Syrian youths are being excluded from most of the opportunities for quality education and training.
Please sign this petition , to help us raise our voice, and get the world to see the real damage that is happening in the Syrian society, due to the banning of Syrian youths to access quality education, and being excluded from training opportunities and other tools that can enable them to rebuild a better future for Syria.
If this petition gets enough signatures, it will force the US Congress to discuss this matter.
For further information and media inquiries please contact: stopexcludingsyrians@gmail.com

Today: ريم م. is counting on you