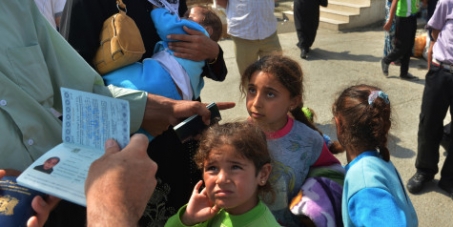 End the harassment of Syrians in Egypt

By continuing you agree to receive Avaaz emails. Our Privacy Policy will protect your data and explains how it can be used. You can unsubscribe at any time. If you are under 13 years of age in the USA or under 16 in the rest of the world, please get consent from a parent or guardian before proceeding.
This petition has been created by صالح م. and may not represent the views of the Avaaz community.
x

UPDATE: Pressure is building -- local and international media are covering this campaign and the Syrian National Coalition has agreed to deliver our call straight to the Egyptian government. Sign now and share with everyone!


Mahmoud is a 9 year old boy whose friends in Egypt have stopped playing with him because he is Syrian. It’s due to a xenophobic campaign, contributed to by the media and the new government, that is being waged against Syrians in Egypt. Syrian children are being arrested, hundreds of refugees have been turned away at the airports, families have been divided, and dozens have even risked their lives trying to escape the country to Europe.

The humiliation and degradation began after the events of June 30. New laws now demand previously obtained visas from an Egyptian embassy and security checks. Before June 30, Syrians could easily use Egypt as a safe haven without these restraints.

Along with the new laws, Egyptian authorities have arbitrarily arrested at least 72 men and 9 children including registered asylum seekers and at least nine people with valid visas or residency permits.

The interim government and the Egyptian authorities must immediately cease using Syrian civilians as pawns in Egypt’s internal politics. Please sign the list of demands on the right and then share this petition.

Today: صالح م. is counting on you

صالح م. needs your help with "End the harassment of Syrians in Egypt". Join صالح م. and 3,590 supporters today