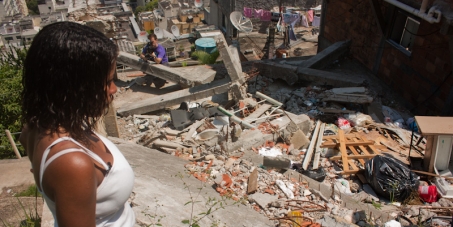 By continuing you agree to receive Avaaz emails. Our Privacy Policy will protect your data and explains how it can be used. You can unsubscribe at any time.
This petition has been created by Kathrin and may not represent the views of the Avaaz community.

With the current lack of dialogue, negotiation and genuine participation in the design and implementation of World Cup and Olympics games projects, the authorities at all levels should put a stop to planned evictions until dialogue and negotiation can be ensured.

This is importante, because innocent citizens are losing their homes violantly being removed often within 24h without receiving the necessary notice and respect nor alternative living recompensation. There mostly is no time left for them to take their personal things before demolitions are taking place. Most of them are still waiting for an adequate recompensation until today. It is important that the brazilian government sees that the world is watching their atitudes and leads them to acting within the law !!!

"Forcing families out of their homes without adequate notice, prior consultation with those affected without offering adequate alternative housing of provision of legal remedies files in the face of the very values the Olympics stand for, violates Brazil´s laws and international human rights commitments."

Thanks for your attention and support

Please watch the video as a proof. This documentary shows the trues that the media doesn´t:
https://www.youtube.com/watch?feature=player_embedded&v=lNHyslL1Ay8