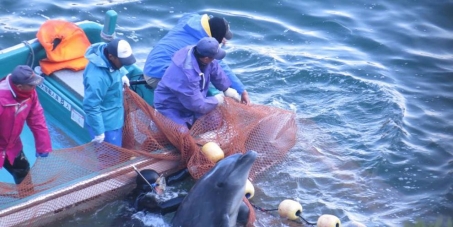 City of Shrine / Broome Western Australia: Publicly and vocally renounce your "sisterhood" with the City of Taiji, JP

By continuing you agree to receive Avaaz emails. Our Privacy Policy will protect your data and explains how it can be used. You can unsubscribe at any time.
This petition has been created by Dimitris L. and may not represent the views of the Avaaz community.

The City of Broome, Western Australia is the only sister city of Taiji, Japan, outside Japan. Every year in Taiji, Japan, dolphins and small whales are slaughtered, and 2014 is unfortunately not an exception. Cetaceans are forced into a cove and separated out: the ones that look good for the public's eye are taken into captivity, while the rest are then slaughtered. Babies are driven back out to sea most likely not to survive since they no longer have their moms and pod to support them. Japan says this is tradition but that is not the case. Japan makes of money every year ripping families apart and committing genocide. This needs to end. The bloodshed needs to stop once and for all.


Australians have a long tradition of Animal advocacy and cannot tacitly or actively tolerate this. The relationship reflects poorly on the City of Broome and must be publicly renounced. Broome did so in 2008, but only for a few months - it quickly reversed course once the negative publicity from the movie "The Cove" died down. Tell the Broome City Council to stop supporting dolphin slaughter and life imprisonment.

Today: Dimitris L. is counting on you

Dimitris L. needs your help with "City of Shrine / Broome Western Australia: Publicly and vocally renounce your "sisterhood" with the City of Taiji, JP". Join Dimitris L. and 1981 supporters today