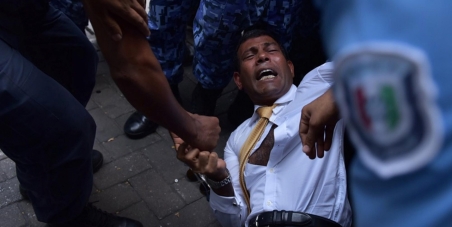 Sign this petition
FN M.
started this petition to
Concerned citizens of the world
The first democratically elected President of the Maldives and prominent climate change activist; Mohamed Nasheed, has been arrested for a politically motivated trial levied against him by the current regime.

It is believed that this is a desperate attempt by the current regime to exclude him from taking part in the next elections as his public support and popularity poses a serious threat to them. Pictures and videos have emerged of President Nasheed being manhandled outside the courtroom. He is being denied representation, proper medical care and is said to be refusing food from prison.

We urge the international community of concerned citizens to not overlook this ongoing injustice. We fear that we are falling too far into the clutches of the old dictatorship. With a corrupt judiciary and highly brutal police force- our rights, liberties and freedoms are no longer protected.

Please do not ignore our predicament. Please make your parliamentarians, representatives and media aware of these injustices. Sign this petition and spread the word before our situation becomes much worse.

We urge the current regime to refrain from making political arrests and resorting to violence. We ask the regime to de-politicise the judiciary so that the due process of law can be exercised. We are seeking peaceful reconciliation and dialogue in the face of the hostile environment our small nation has become.

BREAKING NEWS: President Nasheed has been sentenced to 13 years in prison for 'terrorism' through a farcical trial lasting no more than two weeks. We urge the international community speak up against this blatant injustice!

Today: FN M. is counting on you