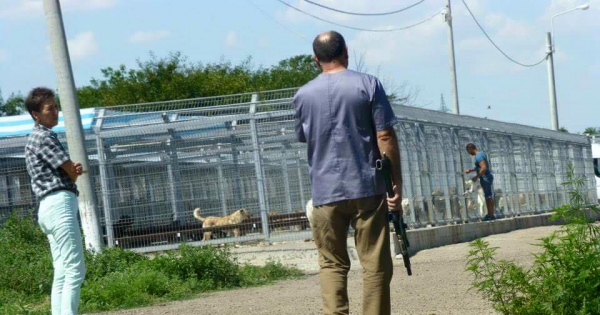 Help us stop the killing of 500 dogs in Ecosal, Galati! Twin town of Coventry in the UK.

By continuing you agree to receive Avaaz emails. Our Privacy Policy will protect your data and explains how it can be used. You can unsubscribe at any time.
This petition has been created by Paws2 R. and may not represent the views of the Avaaz community.

Sign this petition
Paws2 R.
started this petition to
Ionut Pucheanu,
Councillor Lindsley Harvard
Dear Mayor Ionut Pucheanu,
Please reconsider urgently the decision to euthanise 500 dogs in the public shelter of Galati, managed by Ecosal! Considering the scandals that Ecosal was involved in because of the bad management of the public shelter, scandals that all Europe heard about, we consider that the ”euthanasia” of the dogs imposed by the DSV and the Romanian Court of Accounts can not be put into practice.The ”euthanasia” of the dogs by Ecosal Galati will be done by breaking the law, as this institution has done it in the past, too.We remind you that the intentional killing of the dogs and the acts of cruelty against them are criminal offenses in Romania and they are punishable with jail and criminal fees, according to the Law 205/2004.The volunteers taking care of the dogs in Ecosal Galati shelter have been horrified several times by the cruelty to the dogs in the shelter by the employees of Ecosal, the fact that they were not receiving food and medical treatment, as the law states. Although the city hall of Galati pays huge amounts of money to Ecosal, the money are not spent for the dogs, and the only ones who really take care of them are the volunteers and the NGOs.

Dear Councillor Lindsley Harvard,
Does Coventry in the UK really want to be associated with a twin town, Galati in Romania that treats man's best friend in such an inhumane and disgusting manner? We ask the city of Coventry to contact the Mayor of Galati and demand that no dogs are euthanised, breaking their own Romanian laws and bringing shame to Galati, Coventry's twin town. To allow local rescuers to seek solutions without the murder of innocent dogs.

This petition was initially set up in 2014 asking Coventry to cancel its twin town status with Galati due to the inhumane treatment of dogs. TWO YEARS ON AND THE SAME THING IS STILL HAPPENING.

Please sign and share and help us reach 30,000 signers. We will once again take this petition to the Mayor of Coventry. Surely they will not want to have a twin town association with Galati if the streets are red with the blood of dogs?

Working in association with NGO Kola Kariola Association in Romania.

Today: Paws2 R. is counting on you

Paws2 R. needs your help with "Help us stop the killing of 500 dogs in Ecosal, Galati! Twin town of Coventry in the UK.". Join Paws2 R. and 28550 supporters today