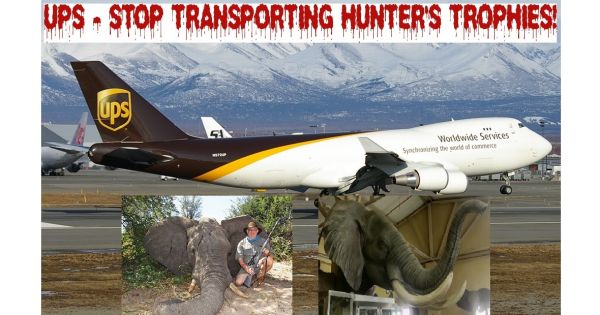 By continuing you agree to receive Avaaz emails. Our Privacy Policy will protect your data and explains how it can be used. You can unsubscribe at any time.
This petition has been created by member-anonymized and may not represent the views of the Avaaz community.

Sign this petition
member-anonymized
started this petition to
David P. Abney, CEO of UPS
After the death of Cecil the Lion at the hands of Walter Palmer, nearly 20 airlines implemented a ban on the transport of hunting trophies, but some remain opposed to such a ban. UPS has strong policies that take wildlife protection into consideration ‐‐ like the inclusion of ivory and ivory products in the company's list of items prohibited for shipment ‐‐ but continues to ship the remains of Lions, Leopards and many other animals killed by trophy hunters.

US President Donald Trump recently announced that he was reversing the ban on hunters bringing their trophies back to the US. Due to the WORLDWIDE outcry over this he has put the plan on hold, BUT it is ONLY on hold.

Urge UPS to treat hunting trophies the same way the company treats ivory. Without the possibility of being able to transport their trophies back home there is no incentive for trophy hunters to kill endangered animals.
Report this as inappropriate
There was an error when submitting your files and/or report.
Inaccurate Inappropriate language Hate speech Illegal Commercial/spam Offensive
×