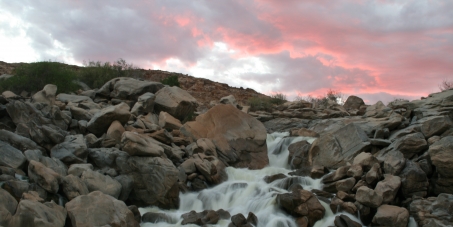 Edna Molewa, Department of Environmental Affairs, South Africa: Save the Augrabies and Ritchie Falls on the Orange River

By continuing you agree to receive Avaaz emails. Our Privacy Policy will protect your data and explains how it can be used. You can unsubscribe at any time.
This petition has been created by Marie-Louise K. and may not represent the views of the Avaaz community.

The two highest falls on the Orange River, both in some of the last remaining pristine wilderness areas are both threatened by the construction of privately owned power stations to supply electricity to Namibia - this will destroy ecotourism in the area and greatly impact the local communities as well as permanently damage two precious pieces of our shared natural heritage.

Time is running out! comments and petitions MUST be in within the next few days!

For the Ritchie Falls project, construction will include blasting away solid rock with dynamite, building long concrete weirs across the river bed, blocking off the flow of water from the Orange Gorge, building concrete canals and installing power turbines, a power station, power lines and a road. There is no benefit for local communities as workers will be sourced from Namibia and the power generated will be sold to Namibia. Ecotourism in the area will be severely affected and the knock-on effect will be significant in this small, very poor community. An awesome piece of wilderness will be gone forever.

The iconic Augrabies Falls will have water diverted from the main falls to generate power through turbines - the falls will be left a trickle, except during flood events. Augrabies Falls is in a National Park and yet the developer has only conducted public participation locally and not nationally to try and sneak this project through.

Hydro power does not make sense for Namibia - why are they not looking at solar? They are one of the least poulated and most sunny places in the world.

Please sign this petition to show that private business should not be allowed to profit from OUR natural heritage. Please also register as an Interested and Affected Party with the consultants running the Scoping and EIA process: Aurecon: Dian Erasmus for the Ritchie Falls (Orange Falls) project: Diane.Erasmus@aurecongroup.com. and Nelis Bezuidenhout for the Augrabies Falls project: Nelis.Bezuidenhout@aurecongroup.com.

Today: Marie-Louise K. is counting on you

Marie-Louise K. needs your help with "Edna Molewa, Department of Environmental Affairs, South Africa: Save the Augrabies and Ritchie Falls on the Orange River". Join Marie-Louise K. and 969 supporters today