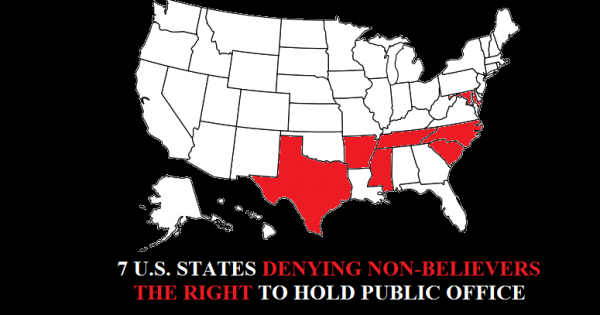 Legislators of 7 U.S. states, U.S. government: Restore the right of nonbelievers to hold office in the U.S.!

By continuing you agree to receive Avaaz emails. Our Privacy Policy will protect your data and explains how it can be used. You can unsubscribe at any time.
This petition has been created by Araylim G. and may not represent the views of the Avaaz community.

Sign this petition
Araylim G.
started this petition to
Legislators of 7 U.S. states, U.S. government
In 2016, open legal discrimination against non-believers is not common in Western countries. Yet, seven US state constitutions, namely that of Arkansas, Maryland, Mississippi, North Carolina, South Carolina, Tennessee and Texas, still have discriminatory laws in their articles that prohibit people that do not believe in God from holding public office.
The right to religious freedom is deeply embedded in the history of the United States: according to article VI of the constitution, "no religious Test shall ever be required as a Qualification to any Office or public Trust under the United States". Furthermore, in the 1961 Torcaso v. Watkins case, the Supreme Court ruled unanimously that "neither a State nor the Federal Government can constitutionally force a person ‚to profess a belief or disbelief in any religion" (Justice Hugo Black).
In spite of all these, non-believers do not have the right to hold public office everywhere in the US. These obsolete laws continue to exist although being unconstitutional and deny the freedom of religion not only to Atheists, but Agnostics, Humanists, Freethinkers and other Non-theists alike.
It is upon us - concerned citizens of the world, supporting diversity and fairness - to call upon these seven US states to abolish their religious restrictions for candidates for public office. Please sign this petition to put pressure on the state legislatures to adopt rules that ensure equal access for all citizens and accept personal beliefs!