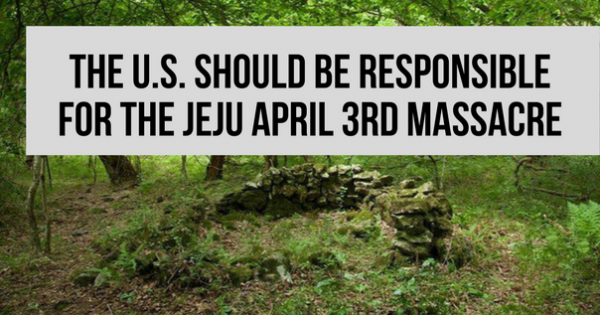 By continuing you agree to receive Avaaz emails. Our Privacy Policy will protect your data and explains how it can be used. You can unsubscribe at any time.
This petition has been created by Jeju Dark T. and may not represent the views of the Avaaz community.

Sign this petition
Jeju Dark T.
started this petition to
Mr. Donald Trump, President of the United States
“The Jeju April 3rd Massacre” is a tragic incident that occurred in Jeju Island, South Korea between 1947 and 1954. This was a period when Korea was ruled by the US military government(United States Army Military Government in Korea, USAMGIK), and the US Military Advisory Group to Korea was exercising the operational control over the Korean army. Even though around 30,000 Jeju civilians lost their lives during this period, the US government have made no comments on this tragic incident for the last 70 years.

It was a chaotic period right after the independence from Japan, and the Korean peninsula was affected directly by the rising tension of the Cold War. On 1 March 1947, during the commemoration ceremony of the March 1st Declaration for Independence, the police fired shots and 6 people died and 8 were wounded. As a result of this incident, everyone on Jeju Island went on a general strike on 10 March, calling for an end to impunity and asking for a thorough investigation into the incident. However, instead of presenting an official apology, the Government began severely cracking down on Jeju islanders .

The authorities and the US military government’s crackdown on the 1st of March 1947 resulted in Jeju islanders’ holding a deep distrust of the Government. During this turbulent environment, part of the population, along with the first President of South Korea and the US government, wanted to establish a separate government in South Korea while others wanted to establish a unified country with the North. Jeju islanders stood up against the division of the Korean peninsula and protested against the first election that happened only in South Korea in May 10th, 1948. On April 3rd, 1948, Jeju islanders rose against the suppression of people and the South Korean election leading to the division of Korea. In response, military and police officers severely cracked down on Jeju islanders and around 30,000 people (10% of Jeju's total population) lost their lives during this period.

It is time to disclose the truth of the Jeju April 3rd Massacre and to end impunity. We call for: