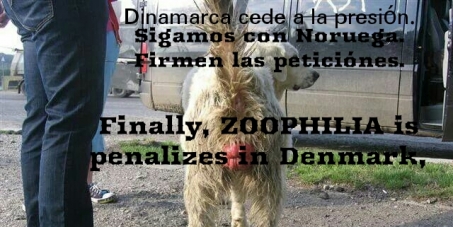 By continuing you agree to receive Avaaz emails. Our Privacy Policy will protect your data and explains how it can be used. You can unsubscribe at any time.
This petition has been created by Geo T. and may not represent the views of the Avaaz community.

Sign this petition
Geo T.
started this petition to
P.Minister of Denmark & P.Minister of Norway
Honorable Prime Minister of Denmark,
This petition arises as a concern and effort to protect animals from being sexually abused.
Although in this modern times we shall not have to pass laws to protect animals from this kind of harm, several countries (i.e. Germany), have had to pass or modify its laws to protect and ensure animal rights. The particular cases we want to bring attention to are those of Denmark and Norway, where sexual animal abuse is not rare, but very common. So common that people openly advertise sex with animals and make a profit of it, without intervention from the police, sanitary or other type of authority.
Clearly speaking and quoting http://www.conservapedia.com/Denmark_and_bestiality: "Neither Denmark, nor Norway have a prohibition on sex with animals, as long as the animals do not
suffer any harm."
In the same site and quoting: "On the internet, Danish animal owners advertise openly that they offer
sex with animals, without intervention from police..."
Logically, these animals are abused, as their conscent from their part does NOT exist. It is really inhumane and abhorrent to see the images of this animals physically damaged, hurt. Some surviving the rape can go through a long and painful agony that can last days. It is imperative that action is taken immediately and promptly to prevent more unnecessary damages and loses, due to this abnormal and cruel behavior pattern. As conscious and sensitive human beings we won't condone this type of undesirable behavior, for the well being of all and in support to all citizens -including Danes- that consider this as animal cruelty (see petition by Lone Maimburg at www.petitionsite.com, a Danish citizen).
In search of well being for all we want to close this petition with a famous quote from Gandhi:
"The greatness of a nation and its moral progress can be judged by the way its animals are treated."
Most respectfully and sincerely,
World Citizens for Animal Rights

Today: Geo T. is counting on you