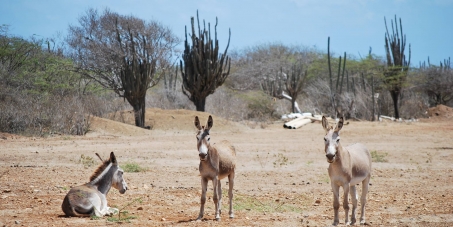 By continuing you agree to receive Avaaz emails. Our Privacy Policy will protect your data and explains how it can be used. You can unsubscribe at any time.
This petition has been created by Louise M. and may not represent the views of the Avaaz community.

Sign this petition
Louise M.
started this petition to
Parliament of Holland president of Kingdom Relations Mr. Jeroen Recourt
Why would an island with such a rich history of preservation, culture and proud heritage choose to kill off the entire population of Bonaire's wild donkeys? By castrating or killing all males and taking all of the females into captivity this is exactly what is going to happen if the people doing this are not stopped immediately!! We need to save Bonaire's wild donkeys! They are our direct link to the past and a big part of our natural and cultural heritage! You can help by signing this petition! WE MUST KEEP OUR CULTURE WHILE MAINTAINING OUR SUSTAINABILITY!

Over 450 years ago, the Spaniards imported donkeys to the island of Bonaire. The donkeys were being used as beasts of burden to move salt and aloe from the salt flats and plantations to the port for shipping. With modernization, these donkeys were no longer needed and set free on the island to harmoniously co-exist with the island people. Bonaire is 111 square miles (over 70,000 acres) with a population of only 17,000 humans making less than 20% of the island inhabited. Bonaire boasts the biggest flamingo colony in the Southern Caribbean, a large population of endangered Yellow Shoulder Amazon Parrots, wild donkeys, threatened mangrove species that sustain a wide variety of water fowl and water life and 5 designated Ramsar sites on the Ramsar Wetlands of International Importance list. We had the 1st Nature Sanctuary in the Dutch Caribbean, Washington-Slagbaai, which was established in 1969. Our motto is “Sustainable growth while maintaining nature and the historical heritage of the island."; however, some argue this is no longer the case!

In 1993, a donkey sanctuary opened. It is privately operated with government subsidies and donations from international animal organizations such PETA as well as good hearted citizens. The original goal of the donkey sanctuary was to help sick, wounded and orphaned donkeys. Recently, their goal then changed to “offer a sheltered, protected life to all the donkeys of Bonaire. Our information about the lives and experiences of donkeys is also raising awareness amongst the local community, schools and tourists”. From the beginning, the sanctuary only took females and babies, which disrupted the natural gender balance. Leaving mostly males in the wild, created an atmosphere of extreme competition and fighting (especially during mating season). This not only lead to badly wounded donkeys, but also increased confrontations with roadways and car accidents.

However, as human and donkey populations increase and people encroach into the donkeys' habitat, clashes between the two groups are occurring. As the chosen solution, the donkeys are just simply being eliminated. In November 2013, the Donkey Sanctuary and other agencies convinced Bonaire's government that the solution to this problem is to rid the island of ALL donkeys. Why would the "Sanctuary" not fight for the rights of these donkeys (direct ties to Bonaire's culture and heritage) with a more equitable approach to a sustainable human/nature balance? Instead, the Donkey Sanctuary, no longer acting as "Donkey Help", put a bounty of $20 for every captured donkey brought to the sanctuary. In addition, to the extreme stresses already endured by the donkeys being separated from their families, this INHUMANE capture by untrained people causes intense trauma to the donkeys who are also often injured in the process. They keep all the females and the foals, the males are castrated and returned to the wild or killed along with the old and the injured/sick, (at their own unwatched discretion). This total disruption of the gender/nature balance has caused tremendous fighting, thus injuries, amongst the donkeys. By their own admittance, the Sanctuary proudly wrote that they captured 101 in November and killed 30... BODIES WERE BEING DUMPED DAILY!! This traumatizing and unnecessary abuse started in November 2013 and is ongoing ...DO THE MATH!! WE MUST KEEP OUR CULTURE WHILE MAINTAINING OUR SUSTAINABILITY!

Quoting the Donkey Sanctuary official webpage: “Our donkey rescue plan progresses very well. During the two months that now been working on this project, we already rescued lots of donkeys from the streets. Many stallions have already been castrated and been given identification chips and ear tags. All mares and foals that we meanwhile rescued from the streets have been given permanent shelter in our sanctuary. It will be a tough job for us to care for all these donkeys lifelong and to raise enough money to do so. But the prospect that soon there will be no more reproduction amongst the donkeys on Bonaire (as all stallions will soon be castrated) and that all donkeys will have the best possible place to live (most of them inside our sanctuary) makes us feel very happy."

What WILL happen when they do not have enough money to feed these donkeys? Donkeys in the wild maintain a regular diet foraging the land for free. If this tragedy continues there will be well over 500 female donkeys in the "sanctuary" on just 140 acres with ground so eroded and trampled that not nothing but dust exists! The fighting and injuries from the gender imbalance are inevitable. 500+ donkeys sadly foraging for food and running to bins for grain and dry imported hay when they could be grazing in freedom... what kind of life is this? Bonaire has a history of interrupted supply chain so what happens when food shipments do not arrive? Check out the situation of the donkeys forced into captivity on St. Eustatius!! (see link below)

WE NEED TO SAVE BONAIRE DONKEYS FROM THIS INHUMANE TREAMENT AND COMPLETE EXTICTION!

We realize there has to be a solution for peaceful co-existence between humans and nature BUT we also know there MUST be a better solution then purposefully castrating and regulating our donkeys to extinction!! To make such an easy decision to rid Bonaire of the entire donkey population is just robbing our people of the immeasurable collective heritage value of these beautiful creatures! Not to mention, the unjust killing and extinction of defenseless animals. Sadly, many of these actions are happening without the knowledge of the local population.
WE MUST KEEP OUR CULTURE WHILE MAINTAINING OUR SUSTAINABILITY!

Please sign the petition and help us stop this tragedy from happening. According to the elimination plan for these beautiful, defenseless, donkeys, if this continues, Bonaire's wild donkeys will soon be extinct!!! Like the removal and extinction of Bonaire's horses was done in the past, our children and our children's children will just know of donkeys through stories told from the elders.

There is an immediate need to SIGN THIS PETITION NOW, as the Sanctuary plans to finish off the population by tranquilizing and capturing all the remaining donkeys in the bush.

THANK YOU FOR DOING YOUR PART TO SAVE OUR DONKEYS AND OUR CULTURE!
The Citizens for a Better, Safer and Animal Friendly Bonaire
- Culture preservationists with a voice for Bonaire's donkeys!

Today: Louise M. is counting on you