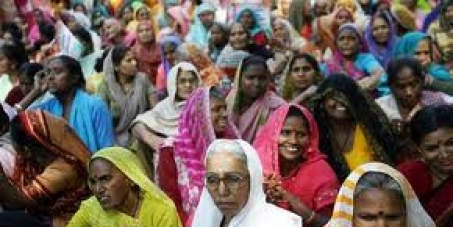 Political Parties of India : Keep your promise, Walk the Talk on Gender Equality in 2014 elections


We, the representatives of several women's organizations, activists and citizens from across the country, are writing to express our deep anguish at the betrayal of the women of this country by the repeated failure of the political class to pass the Women's Reservation Bill, which has been pending before the Parliament for nearly a decade. This political betrayal stands out in sharp contrast to the professed concern and respectfor women and dedication to their cause.

We have, therefore, been compelled to write this open letter to the party leaders of every political party — from the UPA and NDA comprising old and national entities such as the Congress and BJP, respectively, to the newest political formation, AAP, which has raised unprecedented democratic aspirations.
We hereby demand that every political party, national or regional, keep their promise and walk the talk as regards political representation for women.

The women of India listened with great expectations and hopes to your election speeches, countless declarations and public statements in which you promised them their rightful place in society as guaranteed inthe Constitution. However, despite many protests, petitions and demonstrations, it has become painfully clear that there is no real political or human will to pass the bill.

We can only conclude that either you do not wish to share power with women, or you believe that women are not ready to govern, or you are threatened by women’s leadership and influence, or all of the above. This is indeed a strange and bitter irony for a country that progressively gave women democratic franchise decades before some western countries, had a strong woman leader occupy the highest office in the landand has passed legislation reserving one-third to half of the seats in Panchayati Raj Institutions for women. Above all, our most towering document, the Indian Constitution that guarantees rights and gender-basedequality, has already hit most of the high notes of democracy that We the People, should simply uphold.

It is no coincidence that the representation of women in decision-making processes at all levels of power structures remains miniscule. At 11 %, the number of women in the Indian Parliament still remainsconsiderably lower than the world average of 20.8 %. It is also not a mere coincidence that the Women's Reservation Bill has been pending before the Parliament for so long. There is a glaring dissonance betweenwords and actual actions by all political parties on this matter.

We hereby reiterate our view that the subordination of women is an essential part of the larger socio- political structures of domination in society. We have seen the world over, that fundamental changes in the status of women and other oppressed sections of society have occurred primarily at junctures of great socio-political upheavals. It is also true that within women’s subordination there are further levels ofinequality based on caste, class, ethnicity, religion and disability, underscoring that women are subordinated across all sections.

Historically, women's position and inexperience was and continues to be used as a justification for their exclusion from power structures, which continue to be male-dominated. In our society, as with our political parties, women hardly find any representation in key committees, be they on policy or in the selection of candidates. Sadly, there are no exceptions; it is true even of parties who we hoped would lead by example.In the spirit of the fundamental rights to life, equality and liberty, which assume equal right of representation in political power structures, we ask you to demonstrate your claims and concerns by committing to anddoing the following:

· Field up to at least 33% women candidates in winnable seats, starting with the
2014 Lok Sabha elections

Ensure that women comprise 33% in your own party organizations and are involved in all
decision-making processes of your parties, starting with the lead-up to the upcoming


We are keenly aware that this is an important election, but it can be made historic by fulfilling the promise of ensuring that women will indeed enjoy equal rights and political representation, which was promisedduring the freedom movement.
Report this as inappropriate
There was an error when submitting your files and/or report.
Inaccurate Inappropriate language Hate speech Illegal Commercial/spam Offensive