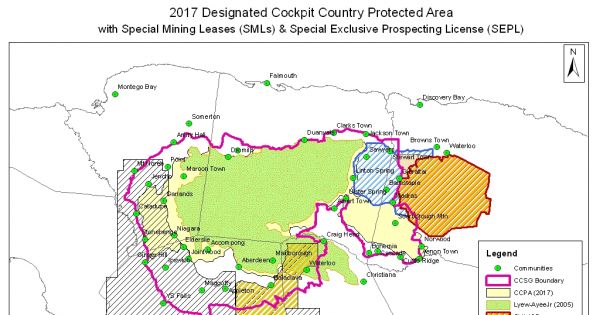 Protect Jamaica’s Cockpit Country – ALL OF IT!

By continuing you agree to receive Avaaz emails. Our Privacy Policy will protect your data and explains how it can be used. You can unsubscribe at any time.
This petition has been created by Wendy L. and may not represent the views of the Avaaz community.

Sign this petition
Wendy L.
started this petition to
Prime Minister of Jamaica, the Most Honourable Andrew Holness, O.N., M.P.
The Government of Jamaica has pledged to declare the Cockpit Country a National Protected Area and promised that no mining will be allowed there. However, the officially declared Cockpit Country Boundary (the GREEN area) encloses only two-thirds of the Cockpit Country - shown by the bright pink line - as recognised by residents, scientists, environmentalists and the Cockpit Country Stakeholders’ Group (CCSG). A Special Mining Lease #173 has been granted for bauxite mining in a large section of northeast Cockpit Country (the BLUE area) which is rich in biodiversity, cultural heritage, ecotourism sites, farming communities, and critical underground water resources.

About the Cockpit Country Boundary
The boundary proposed by the Cockpit Country Stakeholders’ Group was developed between 2007 and 2009 by scientists, community groups and environmental NGOs and was based on geomorphology, biological diversity, hydrology, historical and cultural heritage, and economic sustainability criteria, including the value of ecosystem services such as water security and mitigation of the impacts of Climate Change.

This CCSG boundary was proposed to the Government of Jamaica in 2009 and endorsed by 3,901 people who signed the ‘Save Cockpit Country, Jamaica’ online petition on The Petition Site in 2009; by 37,568 citizens and residents of Jamaica who signed the ‘Save Cockpit Country’ petition to the Prime Minister in 2017; and recommended as the official outer boundary by the government’s own Cockpit Country Boundary Consultation in 2013, done by the Centre for Environmental Management at UWI.

Today: Wendy L. is counting on you

Wendy L. needs your help with "Protect Jamaica’s Cockpit Country – ALL OF IT!". Join Wendy L. and 3363 supporters today