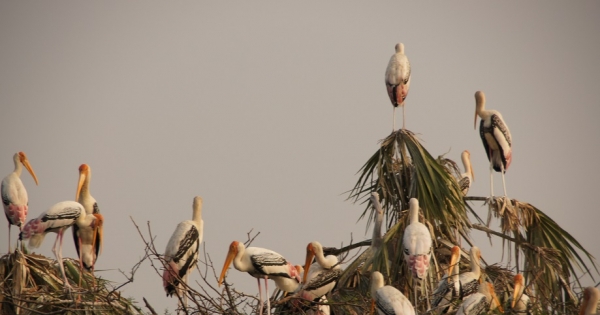 By continuing you agree to receive Avaaz emails. Our Privacy Policy will protect your data and explains how it can be used. You can unsubscribe at any time.
This petition has been created by Capt Rama Rao J. and may not represent the views of the Avaaz community.

Natures Gift Kolleru Wetlands, falls between Godavari and Krishna Basins on East Coast of India abutting Bay of Bengal. It represents one of the largest and oldest natural lake systems in the country. Like all Wetlands, it lacks definite boundary. It could extend to an area falling below +10 feet Contour(901 Sq. Kms) and recede down to +3 feet Contour (135 Sq Kms )

The rich aquatic life of Kolleru had provided the habitat for harmonious co-existence of the Birds, Villagers and Water Body, on which the very existence of the Birds and the Villagers depends. The resources of the lake were always being exploited by the local communities for traditional fishing, agriculture, birds poaching etc activities.

Background 1970s- 1990s
The fishermen, who were dependent on traditional fish capture until the lands were assigned / leased to them, were encouraged by the Government in 1970s to go in for Aquaculture. Some rich enterprising farmers taking advantage of the Government policy converted their private lands in Kolleru to aquaculture and reaped rich harvests. The sudden riches of the Aqua farmers in early 1990s, encouraged more capital intensive corporate ventures for setting up Fish Tanks, leading to an Aquaculture Boom and over exploitation of the Lake.

KWLS, IBA & RAMSAR Site
Witnessing the rapid destruction of Kolleru Wetlands and after an order of High Court of Andhra Pradesh, the G.O.Ms. No.120 was issued in 1999, notifying Wildlife Sanctuary called “Kolleru Wildlife Sanctuary” (KWLS), within the area below +5 feet Contour, covering an area of 308 Sq Kms. Apart from being Wild Life Sanctuary, KWLS is recognized as internationally known “Important Bird Area” (IBA) and a RAMSAR Site.

Notification a Causality due to Political Interference
The encroachments, by way of illegal conversion of Land-Use into Fish Ponds, in the notified Sanctuary areaby Corp orates /Rich Farmers, continued to take place unchecked, even after the Sanctuary was notified. Even after the AP High Court Order in July 2001, directing the authorities to ensure removal of encroachments of lake bed and shall make all endeavours to bring Back Kolleru Lake to its pristine glory, nothing substantial happened. The gravity of the situation can be judged, from the fact more than 25% of the notified Sanctuary area, is estimated to be under illegal encroachment of Fish Ponds.
Vested Interests
But the powerful and influential Aquaculture Lobby, having considerable political clout, who are the main beneficiaries of Aquaculture Boom in KWLS area, oppose the implementation of Notification in its Letter & Spirit. They are bent upon in getting the area restricted to +3 feet Contour resulting in reduction of Sanctuary Area by more than 50%.
Having succumbed to pressure from Aquaculture Lobby, the State Govt proposed reduction of KWLS Area from +5 feet to +3 feet Contour as far back as 2010. The Standing Committee (SC) of National Board for Wild Life (NBWL) appointed Expert Committee under Chairmanship of Dr. Aziz to study the proposal and submit a report.

Dr Aziz Committee Report
The following are the highlights of Dr Aziz Committee Report:
a) Fishpond Lobby, invariably manipulates / stage manages Public Opinion in favour of reduction of KWLS Area and other view points are censored and / or not allowed to be expressed or raised in the Public Forums or before Fact Finding Missions. All most all the representations, motivated by Fish Pond Lobby, are centered round the hype created for reducing the Sanctuary Area, in the name of the Livelihood Issues and Economic Development of the area.

b)The information on wider issues like the importance of Wetlands for sustenance of Ecological Services such as Flood Barrier, Water Storage, Ground Water Recharge etc and the adverse impacts of Intensive Aquaculture, such as Water Pollution, Increase in Salinity etc having serious adverse impact on Drinking Water sources and general well being of the people, is not reaching the stake holders.

c) The Contours would have lost its expected sanctity because of Anthropogenic Interference, Excavations and Siltation. The floods happening in the area are largely due to unscientific human interventions interfering with the hydro logical regimes and flow pattern. The boundary of KWLS has to be fixed and standardized after scientific consideration of the ecological characteristics, and environmental flows to ensure the ecosystem sustainability of the area.

d) Looking at the issues confronting the KWLS, the local inhabitants and the lake ecosystem, the reduction of the Sanctuary Area would worsen the situation in Kolleru. In due course of time, most of the lake-bed is likely to be converted into fish tanks. Floods will remain incessant. The ecological set up of the area will degrade and wildlife will certainly suffer and many species will become locally extinct.

Delay Tactics and Inaction of MOEF&CC
MOEF &CC which accepted the Recommendations of Dr Aziz Committee in TOTO as far back as 2012 has done nothing to get those recommendations implemented. Now the newly formed AP State Govt, has again proposed the reduction of KWLS Areas to +3 Contour. The present SC of NBWL, Chaired by MOS EF&CC, Ignoring all that happened earlier, particularly Dr. Aziz Committee Report, in its meeting held on 18 th August 2015 appointed a Working Group (WG) of 3 Members.

In the name of so called Economic Development, let us not harm Human Environment. Let us learn to respect, protect and conserve Life Supporting Natural Resources, instead of treating them as Expendable Commodities.

Most Insects, Birds and Animals respect the basic elements of the Nature, unlike the Human Beings who are endowed with the Power of Discrimination.

If we do not raise our voice now, the Rich Renewable Ecological Source, the Rare Natures Gift – “Wild Life Sanctuary”, “IBA” and “RAMSAR Site” will be lost forever, to cater for the short term gains of a Select Few.