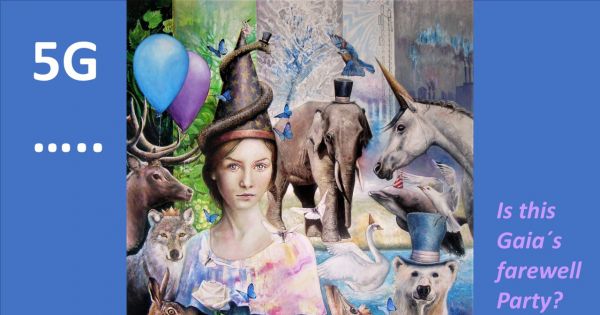 Stop the hazardous 5G roll out in Denmark and the world!

By continuing you agree to receive Avaaz emails. Our Privacy Policy will protect your data and explains how it can be used. You can unsubscribe at any time.
This petition has been created by Mark S. and may not represent the views of the Avaaz community.

Sign this petition
Mark S.
started this petition to
Sign a petition to the Danish government, the UN, the WHO, the EU and all governments
Telecommunication companies worldwide and in Denmark, with the support of governments, are rolling out the fifth generation of wireless network called 5G, within the next two years, and possibly with that the greatest disaster the world has ever known.

Although the WHO in 2011 and 10.000 of independant peer studies
worldwide have recognized the life threatening and irreversible effect of RF
wireless radiation on the environment and on ecological systems, governments
and telecommunication companies worldwide and here in Denmark violate a long list of international laws and agreements concerning the safety and protection of human and environmental safety.

5G is not just a more powerful continuance of 3G and 4G. It works with complete new technologies and much higher frequencies that require transmitting cells every 300 meter and more than 50.000 satellites to come in orbit around our planet, with devastating effects in relation to pollution and global warming. Although they tell us that each individual transmitting cell operates under agreed to norms for radiation here in Denmark (which rank amongst the highest in the world!), accumulated and inter-crossing 5G beams are unpredictable and can be ten to hundred times more powerful than 4G RF radiation, which is already considered to be dangerous and causing possibly cancer.

5G operates on far higher frequencies not used before, and therefore these specific types of radiation can cause enormous damage to the bio-system. The public discussion around 5G focuses foremost of all on intensity of radiation, but not on the type of radiation. Many scientific researches do however point out that even 5G "silent radiation" with low intensity, might be very hazardous, because it effects the frequency range in which many forms of life operate, communicate and are connected to the EMF of our planet!

Governments and telecommunication companies do have a duty
to inform the public of potential dangers. Independant research is however not
supported, public hearings get obstructed, public testimonies get undermined..
Yet, 32% of TELECOM SUPPORTED research tell us that 5G is not safe, against 70 % independent research.


Telecommunication industries and governments, tell us that there is no hard scientific evidence for the damaging effects of wireless RF radiation on our health and the environment. The argument of this is not correct, because they should proof us IT IS SAFE, which they cannot do, and this can possibly turn us and all life on this planet, into experimental guinea pigs.

Insurance companies know the dangers, and do not want to be liable for the
potential EMF dangers and damages. And there is zero clarity as to what entity
will bear legal responsibility. 5G is being rolled out, and soon there will
literally be no place on earth where we can escape its radiation and effect...
We will cook in it 24 hours a day, 365 days a year. It will effect everything,
perhaps irreversibly...

To approach the responsible people in telecom companies with questions or concerns, like as an example the three biggest telecom companies in Denmark, such as TDC , Telia and Telenor,  is made completely impossible. No contact information is handed out, so there is no way you can lodge your concern as an ordinary citizen. Yet you can however sign a petition which is directed to the UN, the WHO, the EU, the Council of Europe and the governments of all nations! Go to www.5gspaceappeal.org for more well documented information on this topic. On the home page you find at the top a heading which says SIGN HERE. Apart from this you can join facebook group "Vi siger Nej til 5G i Danmark".

Please take action now, and spread this message to all you can reach, before it might be to late!

Our greatest enemy is not 5G, it will be our potential apathy...