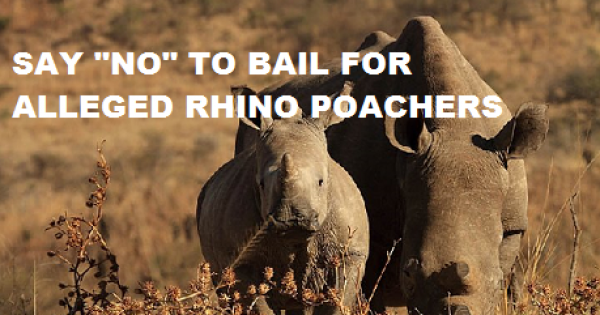 By continuing you agree to receive Avaaz emails. Our Privacy Policy will protect your data and explains how it can be used. You can unsubscribe at any time.
This petition has been created by Allison T. and may not represent the views of the Avaaz community.

The three were arrested at a chalet at the Makana Resort in Grahamstown. The arrest was a major breakthrough for officials in their attempt to curb rhino poaching. The following items were recovered during the arrest:

The suspects have been linked to the recent poaching of a rhino at Buckland’s Private Game Reserve.
The rhino was last seen alive on at about 09:30am on June 17. It is suspected that the rhino was darted. The suspects could possibly be linked to 32 rhino poaching incidents in the Eastern Cape as well as Mpumalanga and KwaZulu-Natal. These accused all have the means and ability to flee the country and as such we implore the court to deny them bail pending their trial The accused have been charged with multiple offences and have been implicated in numerous rhino poaching incidents across the country. In terms of Section 60 of the Criminal Procedures Act the state is required to consider the following with regard to granting bail:
1. Whether or not there is a likelihood that the accused, if released, would endanger the safety of the public or an individual, or would commit a Schedule 1 offence,[71] the court takes the following into account:
the degree of violence implicit in the charge;

2. Whether the nature or circumstances of the offence are likely to induce a sense of shock or outrage in the community in which it was committed;

It is the undersigned petitioner’s belief that any one or more of the above are likely to exist should the accused be released on bail and respectfully request the above Honourable Court to deny bail accordingly.
Report this as inappropriate
There was an error when submitting your files and/or report.
Inaccurate Inappropriate language Hate speech Illegal Commercial/spam Offensive
×