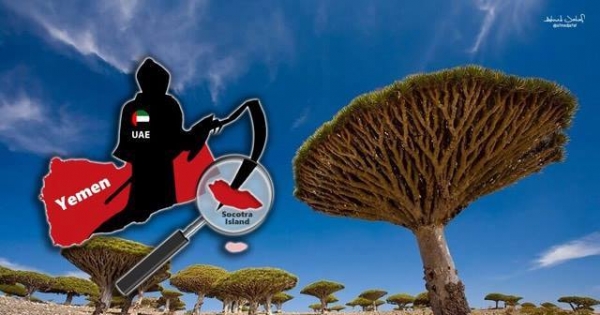 By continuing you agree to receive Avaaz emails. Our Privacy Policy will protect your data and explains how it can be used. You can unsubscribe at any time.
This petition has been created by Save Socotra Y. and may not represent the views of the Avaaz community.

Socotra which is a delicate paradise and one of UNESCO's Natural World Heritage Sites & a universal marine sites of biological importance, is witnessing an unprecedented level of destruction, depletion, abuse and irreparable damage caused by the UAE and some foreign powers who have taken a hold on the archipelago and island of Socotra under the banner of humanitarian aid and investment using the Chapala & Megh hurricanes as excuses and exploiting the unstable political circumstances in Yemen because of the war imposed on it by the Saudi led‐coalition in 26 March 2015.

In a flagrant violation of the laws of nature reserves, they began massive construction of residential cities, ports, hotels, roads and gas stations. They also started exporting fish from the island to UAE with huge quantities than allowed. They have done all that without paying any attention to the damage that they will cause to the unique environment of this island.

We appeal to the UNESCO, the UN and all those who can actively intervene, to use all peaceful, possible, diplomatic and political means to stop the invasion by foreign powers, investors and speculators, and to save the great patrimony of biodiversity, which has been developed over millions of years on the Yemeni island of Socotra, of being lost forever.

Documented list of crimes, abuses, interventions committed by (mainly) the United Arab Emirates and other GCC countries with the endorsement of Socotra Local Administration, is published in our Facebook page: https://www.facebook.com/SaveSocotra

For further information and more details about UAE and other foreign powers crimes on the island, please refer to those video in Save Socotra channel on YouTube: