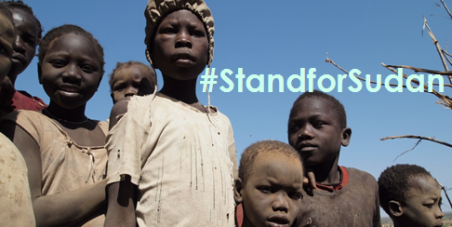 By continuing you agree to receive Avaaz emails. Our Privacy Policy will protect your data and explains how it can be used. You can unsubscribe at any time.
This petition has been created by Shauna L. and may not represent the views of the Avaaz community.

For almost 25 years, Sudan’s President al-Bashir has committed mass atrocities against his own population and has retained power by repressing citizen dissent. Al-Bashir has been indicted by the International Criminal Courts on five counts of crimes against humanity including extermination, torture and rape. Two arrest warrants have been issued. They have not been enforced. Al-Bashir and his Government continue to commit crimes against humanity with impunity.

Since 2011, the people of South Kordofan and Blue Nile States have endured a systematic campaign of persecution including ground offensives and regular aerial bombardment, with the government specifically targeting civilian areas such as schools, markets, homes and people working during harvests.In the Nuba Mountains, terrified civilians seek shelter from the constant bombardment in caves with deadly snakes in the mountains. In the words of a young Nuba man; “We should have been extinguished from the face of the earth, but because of the mountains, we were not”. In Blue Nile, there are no mountains to protect the people, who are forced to shelter in dry river banks or under trees; and they are even more isolated from humanitarian aid.

Since 2009, President al-Bashir has prohibited humanitarian access to civilians who are in desperate need of assistance. This compounds the suffering and hardship inflicted upon the population, 1.2 million of whom are in need of humanitarian aid.

800,000 civilians are either internally displaced or severely affected by conflict in South Kordofan and Blue Nile. A further 212,600have fled as refugees into South Sudan. Atrocities continue in other areas as well: according to credible sources over one hundred people are dying every day in Darfur(UNRC, 2014). This is now deemed to be the longest running genocide in history.

We must act now: not only because it is Genocide Awareness and Prevention Month, but because recent weeks have seen a dramatic escalation of the suffering. Between December 2013 and January 2014, the Government in Khartoum tripled the aerial bombardment of South Kordofan. 56 separate bombing raids were targeted at civilian areas -an average of two bombing attacks per day. February 2014 saw more civilians killed or injured in South Kordofan than at any other point since the current conflict began in 2011; the number of fatalities was more than double those recorded in January.

The humanitarian situation is reaching catastrophic proportions - it is projected that in other areas of South Kordofan, the situation will reach Emergency (IPC Phase 4) levels of food insecurity by March/ April 2014. The Sudan Relief and Rehabilitation Agency have warned that if food and medicines are not immediately delivered to the 100,000 IDPs in Blue Nile, hundreds will die of hunger and disease in the coming months. However, President Al-Bashir continues to deny humanitarian assistance to these regions.

Join us in demanding that the United Kingdom and United Nations recognise the genocide and exert pressure on the Sudanese Government to allow humanitarian aid to reach the people.