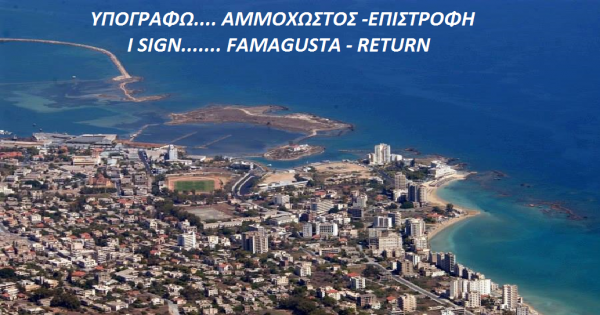 By continuing you agree to receive Avaaz emails. Our Privacy Policy will protect your data and explains how it can be used. You can unsubscribe at any time.
This petition has been created by STAVROS M. and may not represent the views of the Avaaz community.

Sign this petition
STAVROS M.
started this petition to
United Nations , Greece , Turkey and England as Guarantors ,European Union,
UNITED NATIONS
RETURN FAMAGUSTA TO ITS PEOPLE..
FAMAGUSTA has been occupied by the Turkish Army since 1974.To this day a large part of the town is sealed and inaccessible to all including its people.
Returning Famagusta to its legal owners as per the UN resolutions 550/1984 and 789/1992 and even before a final settlement of the Cyprus probllem, will definitely function as a confidence building measure between the Greek Cypriot and Turkish Cypriot communities who will need to work together in the ''Reconstruction''of what is now known as a ''Ghost Town''.Such a development will also assist the ongoing political dialogue between the two sides and at the same time yield economic benefits for Famagusta and inevitably for the whole of the island of Cyprus.
Let's tell everyone that CYPRIOTS want to end the division of their country starting ... NOW !!!
Report this as inappropriate
There was an error when submitting your files and/or report.
Inaccurate Inappropriate language Hate speech Illegal Commercial/spam Offensive
×

Today: STAVROS M. is counting on you