To the members of Brazil’s Congress, the government of Jair Bolsonaro, and world leaders:

As citizens from all over the world, we are horrified to see the rapid spike in Amazon rainforest destruction in recent months. The fate of humanity rests on the fate of the Amazon, and we urge you to do all you can to protect the forest, including passing laws to protect public forests and end illegal deforestation, and bringing international pressure to prevent further destruction of the Amazon. 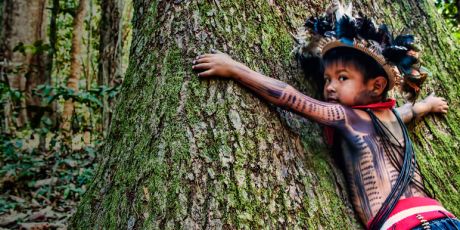 It's frightening -- but Avaaz has just delivered over a million voices to the Brazilian Congress, and this petition is going super viral! With the fires out of control, Brazil’s government has come under massive pressure to act -- let’s use this moment to make sure they do. Sign and share with everyone now!

It's horrifying -- in the past year, an area the size of 500,000 soccer fields has been destroyed in the Amazon! Nearly half a BILLION trees torn down and gone... forever.

This is how they do it: armed militia swarm into protected areas, and indigenous leaders who stand up to them are murdered. There’s even stories of planes dropping gasoline to start massive forest fires. And Brazil's far-right President Bolsonaro is making it even worse by stripping the Amazon of its remaining protections!

Right now, Amazon champions in Brazil’s Congress are considering sweeping new protections for the precious rainforest. And indigenous groups are calling for international support to ramp up pressure to defend their home.

Let’s build a massive call of citizens from around the world to protect the forest -- when it's huge, allies will deliver our voices to Congress in each key moment to silence the chainsaws and stop this Amazon apocalypse!