As concerned citizens and residents of the UK and the world who are shocked by Chinese diplomatic personnel’s attack of peaceful protestors at the Chinese consulate in Manchester, we urge you to make it clear to the Chinese government, and the world, that your country will not tolerate such behavior on British soil. We ask you to immediately summon the Chinese ambassador, declare the Chinese consul-general in Manchester a persona non grata, and expel those involved in the attack. We cannot let an authoritarian regime apply its tactics to silence dissent in this free and democratic country. 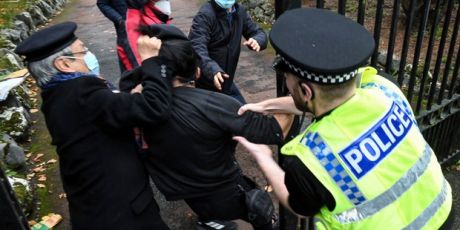 This is an outrageous attack on democracy, free speech, and human rights. On British soil! We can’t let them get away by abusing diplomatic immunity! Let’s show China and the world that the UK won’t tolerate such barbaric behaviour.

New PM Rishi Sunak has guaranteed that he would prioritize values over trade with China. This is the first test of his China policy. Chinese diplomats involved in this incident should be declared unwelcome and expelled. Join the petition now to help stop China’s “bully diplomacy"!