What is ClimateStrike?
A year ago, Greta Thunberg, a 15-year old Swedish student walked out of school and sat on the steps of Parliament to demand her politicians listen to climate scientists. Her action sparked the #FridaysForFuture movement and now over a million students have joined Greta in striking.

But this time, it will not be only students taking to the streets. It will be all of us! On September 20th, days ahead of a major UN Climate Summit, tens of thousands of us, young and old, will join the next global #ClimateStrike to send a clear message to our leaders - listen to science, rapidly switch to 100% clean energy, and cut carbon pollution completely. See an invite video from Greta here.

Avaazers across the world will be calling on governments to deliver emergency plans to this planetary crisis, by rapidly shifting our societies and economies towards 100% clean energy.

Why #ClimateStrike?
Heat waves, floods, and hurricanes are killing thousands and devastating communities across the world. Climate change is already a deadly reality. Governments are meeting on September 23 for the first UN Emergency summit, but despite the latest stark warning from climate scientists that we have less than 12 years to cut carbon pollution in half, politicians are ignoring their call.

That’s why, days ahead of the summit, Greta and her fellow students are walking out of school to teach politicians a lesson in leadership. Avaaz members, 350.org, and many others are joining with Fridays for Future to help make September 20th the biggest #ClimateStrike yet!

How to #ClimateStrikes
A #ClimateStrike is leaving your place of work, your school, your regular routine for a couple of hours, and gathering with others on steps of power in your community to draw attention to the climate emergency. When tens of thousands of us do this together on September 20th, it will be a massive show of people power that will be impossible for politicians, leaders, and the media to ignore.

When and Where to #ClimateStrike
When: Friday Sept 20.
Where: Your school, your company, a government office, a public space, steps of power in your community (City Hall, a company), anywhere you feel called and people can gather.

How to organise your workplace for a climate strike

Step 2: Put a proposal or resolution to your employer

Once you’ve got an initial plan and interest, make a proposal to your employer, outlining how and why your workplace should join the #ClimateStrike. Negotiate an arrangement that will work for everyone and remember that a goal of the Global Climate Strikes is to encourage activism and disrupt business as usual, everywhere, and force politicians to act with urgency to address the climate crisis. 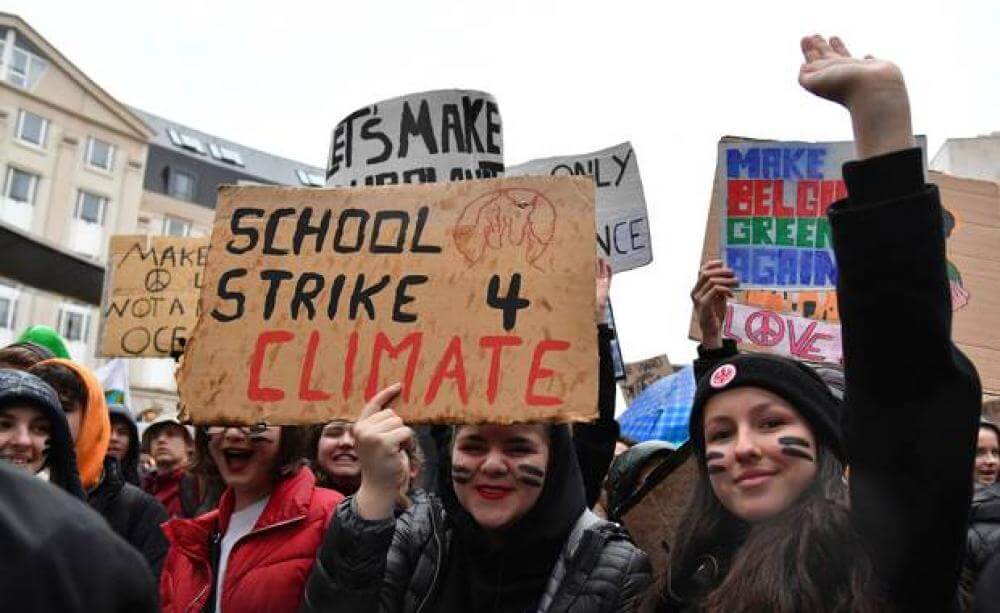 Many unions around the world have declared support for the student strikes and will join in a variety of actions in political protest on September 20 or during the week following. These actions will take many forms and some ideas are listed below.

Workers’ rights and labour laws vary hugely around the world, and not everyone can strike or be part of a union without risk of legal sanctions. On our grossly unequal planet, some people can’t do without a single day’s work, and some of us work for bosses who would fire us if we dared to try.

And some jobs simply can’t stop: emergency room doctors should keep on saving lives. But many workers will act and that may include a decision by unions and their members to call a strike.

Here are a range of ways you could join the Climate Strikes if you’re supposed to be working on September 20 or 27:

If you and enough of your colleagues are able to take industrial action, you could organise a walkout from your workplace at a specific time and assemble outside or go and join up with a bigger Climate Strike event in your area. Take and share pictures and think creatively about how you can represent your action visually.

You could work with your employer to schedule a training day about the climate crisis and how it impacts your industry to coincide with the September climate strikes. And attending a local #ClimateStrike event could even be an important part of the training for all participants!

Organise an action at your workplace

This could involve you and all of your colleagues holding a short event at work in solidarity with climate strikers – and posting selfies on social media with signs explaining what you are doing and why to build awareness.

You could encourage everyone to wear a badge or armband to show their solidarity. Or you could ‘sound the alarm’ by making lots of noise together or holding a silent vigil. You could consider how your job connects to the climate crisis and connect with other #ClimateStrike organisers in similar occupations or professions around the world by using the hashtag.

You could request official leave in advance from your workplace and encourage everyone you can to do the same. Let your employer know why you are taking leave to ensure that your action builds awareness within your workplace about the gravity of the climate crisis and the sacrifice that you & others are taking to address it.

Take action in your lunch break

Why not use your lunch break to go along with co-workers to join the #ClimateStrike if you can’t take the day off. Lots of #ClimateStrike events on September 20 and through the week to the 27th will take place around lunchtime. If possible, you could consider starting your day early or ending late to make up for it. Some employers would require notice of such an action.

Get your workplace to pass a resolution

Some employers have already announced they’re giving their staff the day off to join a #ClimateStrike without penalty. You and fellow staff could put a proposal to your workplace to do the same and get your workplace to publicise the fact to build awareness of their leadership.

Here’s an example motion from the University of Technology Sydney in Australia.

We encourage you to take action or join a #ClimateStrike event. If you are in doubt about the legal standing to do so or concerned for any other reason, consult a union.

How to organise your community for a climate strike

Before you start organising a #ClimateStrike, make sure you locate and connect with any youth strike and other climate groups that have sprung up in your community to plan together towards September. Take your lead from the young people who called this mobilisation. You can connect with young climate strikers through the #FridaysForFuture platform, by talking with young people you know or searching on social media.

Step 1: Set up an organising team

You can’t do this alone. Bring together a core team of people with the necessary connections, skills and passion you’ll need to make this a big, empowering moment for everyone in your community.

Step 2: Invite your community to join

Create a to-do list of everything you’ll need to make your Climate Strike event a success. Share it widely with everyone involved, invite volunteers and delegate tasks to volunteers and working groups.

Tasks to think about include:

Don’t forget to distribute sign-up sheets and flyers on the day for any follow-up events you or your partners are organising.

The #ClimateStrike will generate lots of new energy, momentum and attention for climate action in your community. It’s a great moment to absorb new organisers and volunteers into ongoing local campaigns and groups so that you can keep up the pressure beyond September. 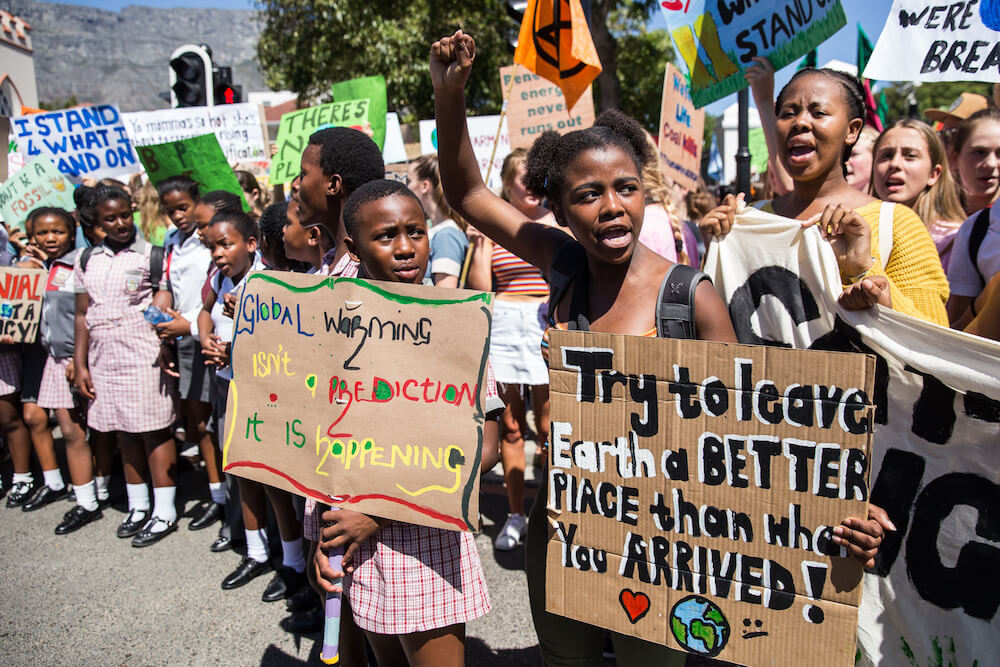 If your community has a large and active climate movement, consider organising a big march through the centre of town or to a government building. With enough people, marches are a powerful way to get your message into the street (and into the media). They’re loud, they’re often disruptive, and they jolt people out of their ordinary day to make them think about your key message and demands.

Make sure to go big on banners, signs, and visually-compelling elements that get your message across clearly.

Like marches, rallies help push your message into the public sphere in a big way. They’re loud, they take up physical space, and they disrupt business as usual — especially if you’re in a busy place. You don’t need quite as big a group as for a march but you can still make a loud impact.

Rallies are a great way to fire up the crowd — everybody loves to cheer! — educate the public about the nuances of your issue, and give young climate strikers and other partner groups a platform to get their message across. Rallies & marches = better together!

If your town or group is on the smaller side consider organising a solidarity photo action that can demonstrate your community’s support for the #ClimateStrike.

Organise your action in a place that’s recognisably your city, town, workplace or community (e.g. the town hall, a famous bridge, or a famous view of your city skyline).

This type of action can be pretty easy and quick to organise, and could involve a banner drop, a simple gathering of people, or any kind of peaceful action that leverages the location you have chosen to show solidarity with the millions of people in the streets that day. Send your message through banners, signs, props, or other creative visual elements!