As citizens across the world, we urgently call on you to 'Correct the Record' -- by working with independent fact checkers to show effective corrections to each and every person who sees verifiably false or misleading content on your platform. It’s the best thing you can do to restore public trust and protect democracy and freedom of speech. 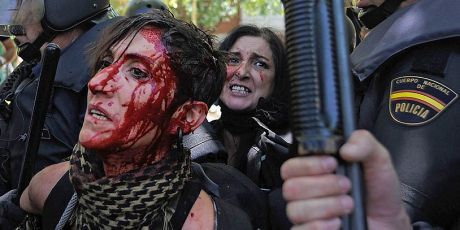 This shocking photo of a young woman, left beaten and bleeding by police at a protest, went viral on social media in France.

It’s the sort of thing Avaaz might launch an urgent campaign on. But there’s just one problem -- the image has nothing to do with France. It was taken in Madrid, years ago. It’s fake. Untrue. A lie.

Disinformation like this has the power to turn protests violent, destroy trust in our democracies and make us hate, even kill each other. But there's a simple solution to this threat: distribute corrections to dangerous fake news -- to EVERYONE who has seen it!

Avaaz has pitched the idea to key decision-makers all over the world, and many of them love it. Facebook is sensitive to its public image, and Avaaz staff are meeting top executives there this week -- let's get massive public backing from people everywhere for them to correct the record on fake news!