Sheila Dikshit has committed to the Womanifesto and prominent members of the other two parties are considering - let's step up the pressure and pull them over the edge! Use the numbers below to call the BJP and AAP directly and let them know there is NO excuse not to sign the Womanifesto: 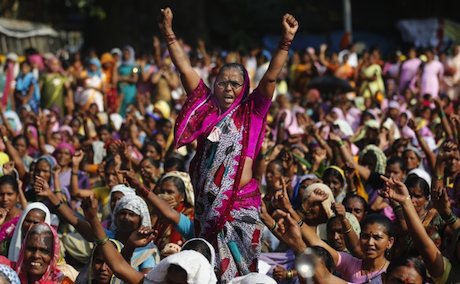 Update November 30th 12:30pm IST: Great news! Chief Minister Dikshit just endorsed the Womanifesto! Let's keep up the pressure to get all 3 candidates on board!

With days to the election, this new 6-point plan could bring real change to make the city safe. Let’s get the CM candidates a flood of messages.

Since Delhi rose up against rape and sexual assault last December, over 1300 rape cases and thousands of molestation cases have been reported. But, despite a round of reforms, lakhs of assaults remain invisible to the police and the judicial eye, and Delhi’s women still do not have the freedom that is every person’s birthright.

With this election Delhi’s citizens are demanding more action to stop these crimes against women. Slogans and limited reform are not enough.

The following manifesto is a six point plan critical to protect the freedom and safety of Delhi’s women and girls. All candidates should commit to enforcing this plan within one year:

1. Educate everyone: We will develop and begin to deliver comprehensive, well-funded and long-term public education programmes to end the culture of gender based violence including: curricula for each level in schools and universities, teacher training programmes; SMS, radio and TV public service campaigns to challenge the mindsets behind violence against women; curricula in medical schools and law schools, and modules for professional training.

2. Make laws count: We will work to ensure each government agency produces a detailed action plan to implement the laws to end violence against women and foster their enforcement. This will include infrastructure, personnel, training and will specify the funds allotted for each intervention. We will also adopt a Code of Conduct to end misogynist language in the Vidhan Sabha.

3. Responsive police: We will work with the Central Government to establish and enforce a public protocol for police response to crimes against women. We will change service rules to recruit, promote and penalise based on gender attitudes and performance; recruit more police officers to more effectively patrol and protect (particularly women); and establish rape crisis response teams. Police personnel who breach the new procedures will be investigated and removed.

4. Faster, competent courts: We will establish more fast track courts for crimes of violence against women, increase the number of judges to 30 per 100,000 population and increase the related staff and infrastructure. We will work with the Chief Justice of the Delhi High Court to seek reform of court procedures to address victims’ needs.

5. Support to survivors: We will adequately fund and set up one-stop 24 hour crisis centres in hospitals in each police district, to provide comprehensive services to women who are victims of violent crimes. Services will include police liaison, medical, legal and counselling services, links to voluntary shelters and compensation. One stop crisis centres will improve and merge current rape crisis cells and crisis intervention centres where appropriate.

6. Safe streets, safe city: We will ensure Delhi is safe to move around, day and night. We will include women’s safety guidelines in the City Development plan, Master Plans and Local Area plans, and conduct safety audits. We will set up accessible night shelters, creches, and women’s toilets, especially in the poorest areas. We will expand the DTC bus fleet to 25,000; run safe transit workshops with drivers’ associations and unions; increase metro and bus security services; and extend the Delhi metro’s hours of operation.

For a PDF version of the Delhi Election Womanifesto, click here.