The far-right could hijack the EU elections, stuffing the European Parliament with racists, bigots, and climate deniers.

It feels like these parties have come from nowhere. Now in some EU countries, they are leading the polls! So what’s their secret weapon?

Right now, Europe is drowning in disinformation, like that gangs of migrants are attacking the police, or that the Notre Dame cathedral will be rebuilt with a minaret! For months, our team has been investigating this tsunami of fake news in Europe and we've uncovered a shocking truth -- content from disinformation networks has been viewed hundreds of millions, maybe even billions of times!

Study after study shows no one is immune to these toxic lies, but the more we know what to watch out for, the better we can protect ourselves. Before the election, Avaaz has prepared a briefing to help Europeans get smart on disinformation. Read it now then share it widely.

5 things we all need to know about disinformation

1. It feeds off our fear and it travels fast.
Humans are hardwired to remember negative information over positive, it’s how we learn. Peddlers of disinformation knows this and play on deep emotions, which make us far more likely to share it on social media -- and so it spreads up to six times faster than factual news!

2. It thrives on social media and reaches billions. The more time we spend on social media, the more money these companies make. They know that extreme and shocking content hooks our attention, so they programme their sites to promote it. And it reaches billions.The biggest newspapers sell a few million copies, while news on Facebook reaches over a BILLION per day.

3. It is being weaponized against us.
Authoritarian leaders from Brazil to China are weaponizing disinformation as the newest move in the playbook for age-old divide and rule politics. But it’s Russia that leads the pack -- their huge ‘troll farms’ employ legions of people to set up millions of fake accounts to spread disinformation. And RT, Russia’s propaganda outlet, is one of YouTube’s most-viewed news channels with an estimated 2 billion views!

4. It's killing people and poisoning democracy.
Disinformation is driving vigilante violence in India and Brazil, and fueled brutal ethnic cleansing in Myanmar. It’s also poisoning our politics. Fake news helped give us Brexit, Bolsonaro, and Trump. And it’s destroying trust in mainstream media, our democratic institutions, and political leaders, creating the perfect breeding ground for anti-establishment strongmen to rise to power. Because of disinformation, social media is now a threat to democracy.

5. No one is immune.
People across the political spectrum are being micro-targeted as part of a strategy to polarise and erode our societies. In the US, Russia's troll army created a fake page for American black activists that drew more followers than the official Black Lives Matter movement pages! We think we’d never fall for this stuff, but studies show that even the most educated among us tend to believe fake news, and people over 65 are even more likely to spread it.

Disinformation spreads distrust, fear, and lies. But the more we know about it, the more we can stop it -- share this briefing with friends and family to educate them on the disinformation threat. And read on to see how you to protect yourself!

5 ways to protect ourselves from disinformation

1. If you see something, say something!
Don’t believe everything you read on the internet. Seen a random Facebook post with shocking info about a political candidate? Don't trust it! Check the facts with reliable sources, and if you think you may have found a piece of disinformation, let us know here.

2. Keep supporting real journalism. Most traditional media is covered by regulations and ethics that make it far more trustworthy than a random dude on the internet. They’re not perfect, but they check their facts and can be held responsible! Subscribing to a high-quality newspaper with real journalism is one of the most powerful acts a citizen can take today.

4. Don’t give up on democracy! The goal of the troll armies is to create such a climate of distrust that ordinary citizens walk away from democracy. When that happens, fanatic extremists can dominate it. We must keep showing up and voting, encouraging our friends and family to do the same, and holding our elected officials to account.

5. Choose hope in humanity.
Disinformation preys on our deepest fears, appealing to our natural negativity bias and bringing out our more angry and cynical sides. But if we can learn to engage with the arguments of people who don’t think like us, with empathy, big ears, and wisdom, we can connect across our differences. We have more in common than our fears make us believe. If we trust that, amazing things can happen.

Our civilisation is the most successful in human history, on so many fronts, from human rights to democracy. We're on track to end poverty within a generation, and we're close to putting every child in school. It’s clear that democracy, and great journalists, accountable political leaders, and fellow citizens got us here. But the forces pushing disinformation are powerful and threaten to destroy all of that. Let's not let them win by giving up hope!

P.S. What does disinformation actually look like? Check out these 3 terrifying real-world examples!


1. When disinformation is used to fuel a genocide 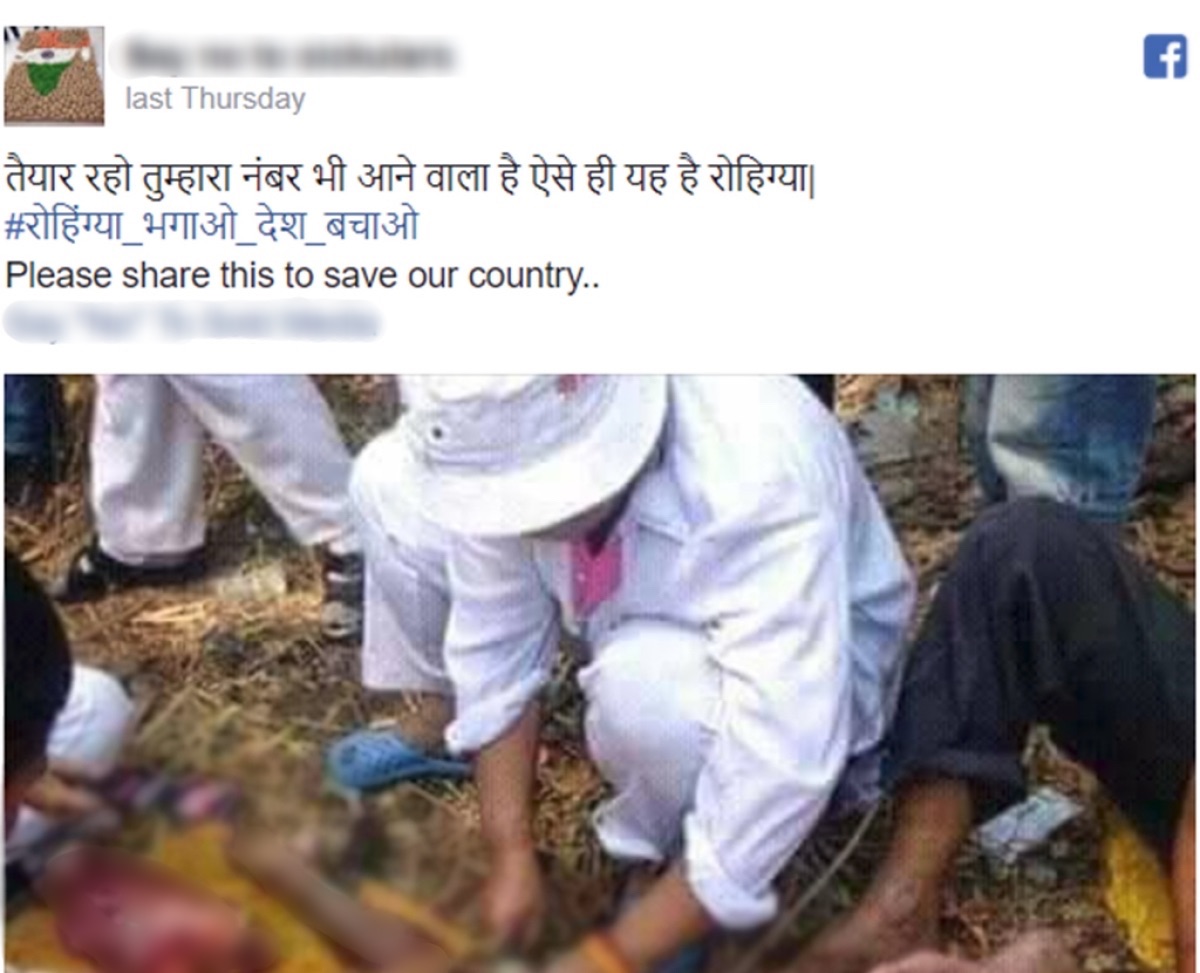 Hateful lies about the Rohingya minority in Myanmar went viral online. Fake claims of things like cannibalism (like above) were used by the military and anti-muslim groups to justify ethnic cleansing. Thousands of Rohingya families were slaughtered, women brutally raped, and homes torched to the ground, leading UN officials to declare a genocide.

2. When fake news is used to attack entire groups, like migrants

Almost 10 million people saw this video of migrants destroying a police car. The  problem? It's also entirely fake -- it's actually from a movie, and was debunked years ago! That didn't stop far-right groups in Italy and across Europe from sharing it again, even just a few weeks ago -- and Facebook did nothing while it went viral, inflaming suspicion, hostility, and even hatred of immigrant people.


3. When disinformation is used to polarise and stoke fear and anger 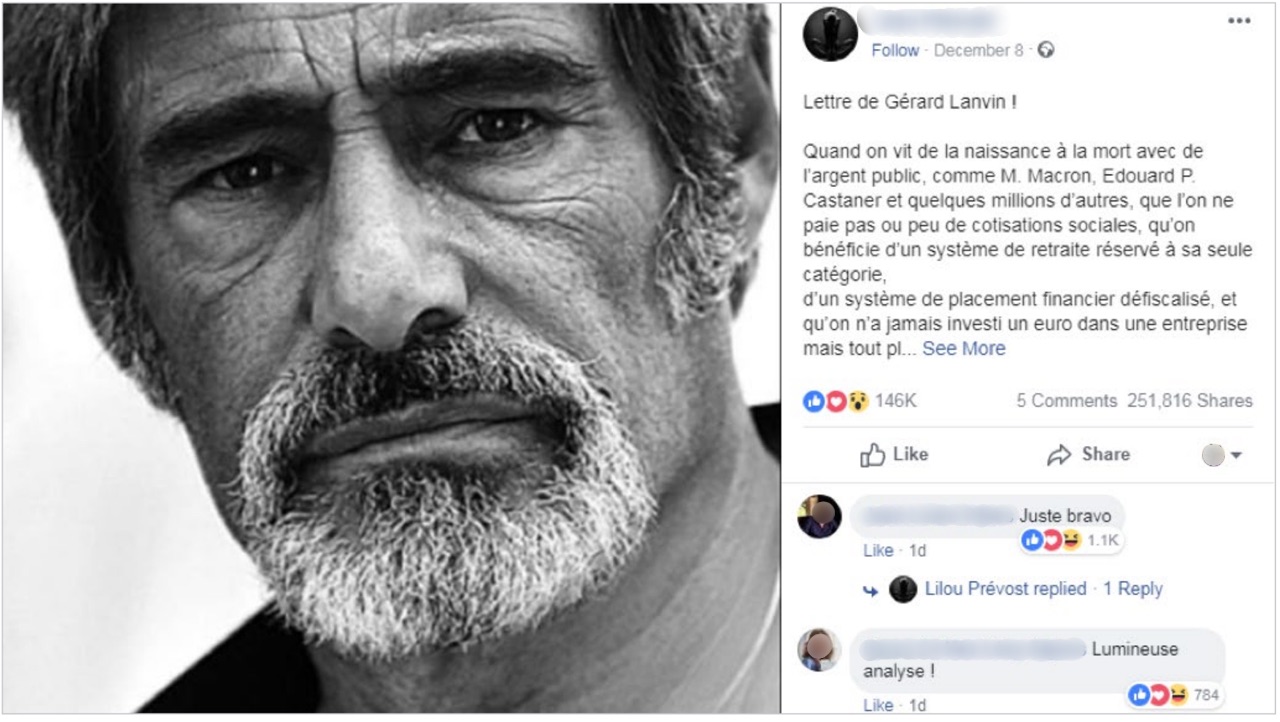 In France, people shared a letter by French actor Gérard Lanvin over 251,000 times, criticising President Macron and his government! The only problem? It was completely fake, with the actor himself claiming he had been a victim of identity theft. It's a clear example of how disinformation is used to sow distrust of the government -- and why it's such a major threat to democracy.