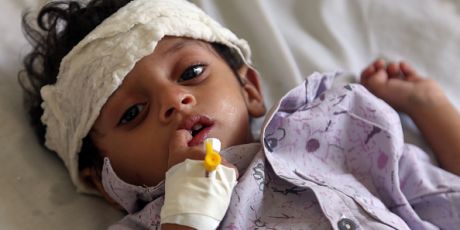 85,000 children under five years old have starved to death in Yemen. 85,000 lives snuffed out before they can even begin.

They’re the innocent victims of a famine caused by a senseless Saudi-led war. Another Yemeni child dies every TEN minutes.

It’s heartbreaking -- and the worst part is that our governments are complicit. Despite the famine, despite the bombing of a busload of school kids, countries like the US, UK, France, and Canada are still supplying the Saudis with hundreds of billions of dollars in tanks and missiles.

We can’t let this go on -- so we're taking them to court!

Small, tenacious groups in the UK, France, Canada, and beyond are pursuing groundbreaking legal cases to sue governments for selling weapons to Saudi. But they're working on a shoestring -- and need our urgent help to keep going. If they win -- and they could -- it'd be an incredible precedent that could finally bring an end to Saudi’s brutal war in Yemen.

Chip in just the cost of a meal -- something most families in Yemen won’t have today -- if we raise enough we can take this fight not only to the courts, but to the corridors of power to push for a meaningful peace process, and change across the region. Let's stop the Saudi war machine and save countless lives in Yemen.