1 MILLION FOR GM FACTS NOT CROPS

To the President of the European Commission José Manuel Barroso:

We call on you to put a moratorium on the introduction of GM crops into Europe and set up an independent, ethical, scientific body to research the impact of GM crops and determine regulation. 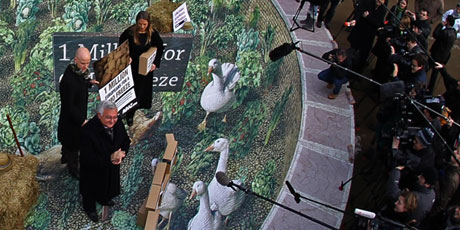 On Thursday, 9th of December, we delivered the first European Citizens' Initiative to Commissioner Dalli, calling for a moratorium on GM crops and the creation of an independent, scientific and ethical body to test and regulate GM.

After the Commission broke the twelve year ban on GM crops and put the GM lobby's profits before public concerns, over one million of us signed this initiative. People across Europe want more rigorous testing before crops are approved that could threaten our health and environment.

We now expect the Commission to study our proposals and respond within four months by holding a public hearing with the European Parliament. We will keep the pressure on until we get an adequate response -- keep signing up!

Important Note: The European Citizens' Initiative is a formal legal process with strict requirements. You need to type a valid first and last name, address, email, nationality and date of birth to be included as a petition signer. If you have signed before but not included all this information - please sign again! Your signature will only be counted once.
This page is secure, your data will be protected.