As citizens concerned about the threat forest fires pose to people and planet, we call on you to take urgent action by redoubling recent efforts to hold those responsible for starting fires to account through better law-enforcement, government reform, and strong climate action. We urge you to come up with a comprehensive fire-prevention plan and support industry commitments to stop the haze. The health of a generation and the future of Indonesian forests lies in your hands -- we count on you to act now. 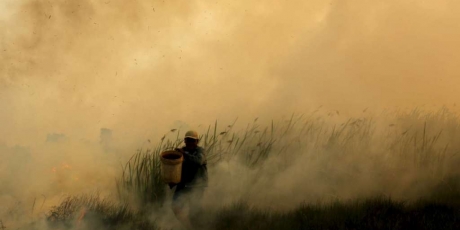 Forest fires in Indonesia are burning orang-utans’ habitat to the ground, choking children across the region, and harming the climate. It's called "the haze" -- and this year, we could finally stop it.

The solutions to the problem are already known: Stop the fires before they even start, get tough on those who break the law, and work with communities to preserve precious carbon-rich peatlands. With pollution levels off the charts and videos detailing how bad it gets going viral, Indonesia's president and important actors in the region are under pressure to act -- or risk their citizens' wrath.

That's where we come in. There are tens of thousands of Avaaz members in Southeast Asia, and millions across the world, who care about our health and our climate. If all of us demand clear action now, we can give Indonesia's President the support he needs to crack down on the fire-starters, boost law-enforcement and give governments in the region a massive mandate to use the power of the law to make health win over haze. Sign now.