We believe the Heathrow 13 did what they genuinely thought was in the best interests of the public and society as a whole therefore we do not think it's in the public interest to give them a custodial sentence. No environmental activists has ever gone to prison for aggravated trespass and that should not change now. 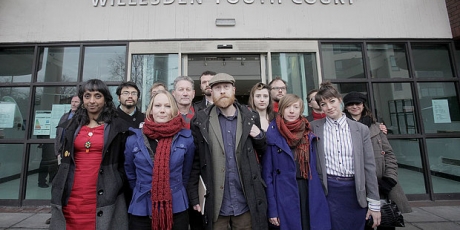 Next week, thirteen peaceful activists are facing prison for protesting a project that could destroy a community and pollute our air. If we stand with them now, we can make sure they don’t land in prison cells.

The 'Heathrow 13' were found guilty of aggravated trespass after they chained themselves to Heathrow airport’s northern runway to protest plans to expand it. Expansion means thousands of locals will be displaced and the already high levels of pollution could become toxic. The judge said they should expect custodial sentences. This will be the first time peaceful environmental protesters have gone to prison for the offence of aggravated trespass.

Judges have always tried to steer clear of jailing peaceful protesters because it doesn’t serve the public interest. Let’s stand with the Heathrow 13 and show Judge Wright that there’s no public support for sending them to prison.