We are One People, Undivided

To all those extremists who would divide us, and to our fellow citizens and leaders who must choose how to respond:

We citizens of the world have grown wiser. We see the game to drive us apart. To use horror to make us turn away from each other in fear, and turn on each other in a spiral of brutality.

And we resolve, today, that every act of hate and cynical manipulation will only bring us closer together. We, Muslims and Non-Muslims from every nation of the world, resolve to love each other more fiercely than ever before, to listen more deeply to each other than ever before, and to let the pain of each fresh atrocity committed in the names of our faiths or nations or cultures be the birth pangs of the more united, more loving world we are determined to create.

We will build that world, because the truth is on our side. The truth that we are all one people, one tribe. Our fates are bound together, and together we will rise, undivided. 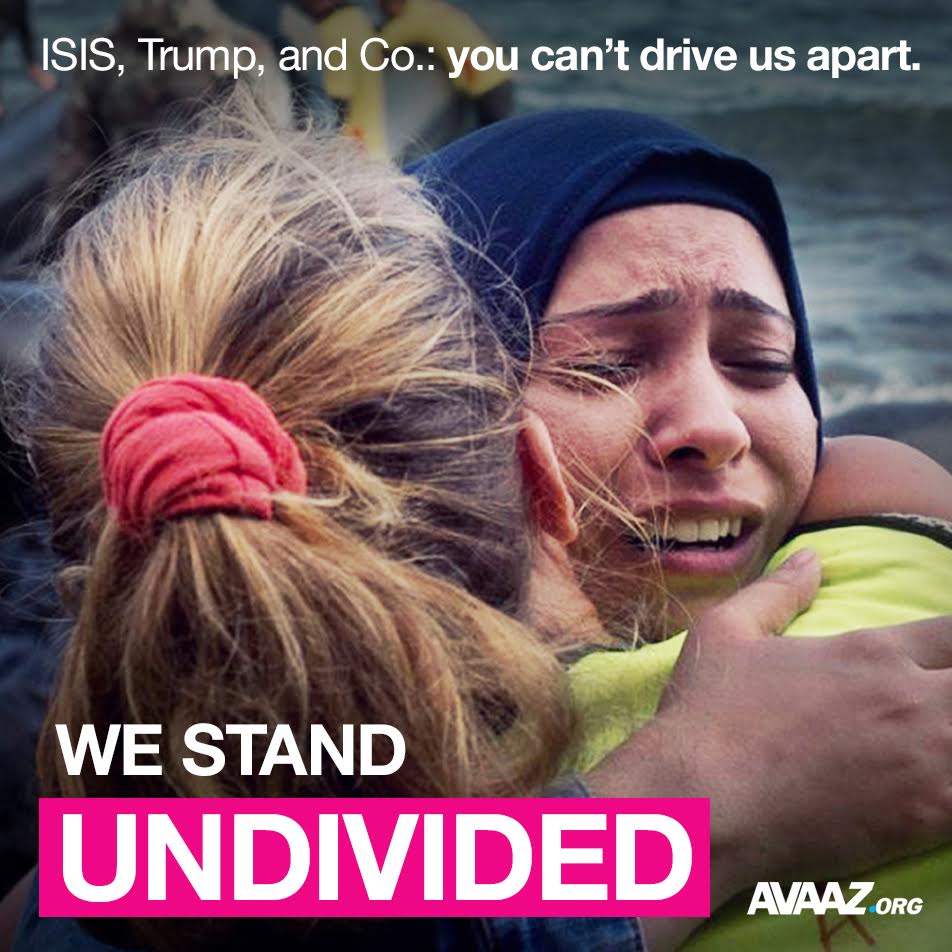 History is made in moments, often of crisis and uncertainty, and the wisdom with which we meet them. This is one of those moments.

ISIS' goal is to split the human family. To divide the world's 1.5 billion Muslims from everyone else. Those in our societies who sow fear, suspicion and hatred of Muslims - the Rupert Murdochs and Donald Trumps - are the best allies the extremists who attacked Paris, Beirut, Brussels could ask for.

Muslims are almost one quarter of humanity, and 99% are as horrified by the ISIS attacks as the rest of us. They have been the greatest victims of ISIS, and have the greatest power to help defeat it. So let's answer hate with humanity, and seize this chance for transformative change. For all of us - Muslims and Non-Muslims everywhere - to fiercely welcome each other into our one human family like never before.

Sign the global "Undivided" message, add your own, and share the page with everyone - if enough us join now, we can start a global wave of solidarity, and make the pain of these attacks the birth pangs of a more beautiful world. When we get to 500,000 signatures Avaaz will run ads in Muslim community papers and online, as well as key right wing papers that spread fear and division.

The real front line of this war is not just in the dusty towns of Syria and Iraq, but in the media and social media forums where the stories we tell ourselves compete. There is a fraternity of ignorance and hatred and it stretches across borders, in which extremists on all sides work together to drag the rest of us down into their backward world of spiralling brutality.

Our governments will need to increase their vigilance in preventing attacks, and support military efforts to defeat ISIS. But our job as people, and our leaders' jobs as moral leaders, is to ensure that love, the transformational antidote to ISIS' hate, blooms between Muslims and everyone else everywhere. THAT would be ISIS' worst nightmare - it might even give some of the angry young men they recruit cause to hesitate - a chance to see an alternative as inspiring to them as the backward brand of faith that ISIS markets.

At the darkest times, our light as humanity can shine brightest. Human rights were not recognized until after the second world war. The world got it wrong after 9/11, when leaders like George Bush played into Al Qaeda's hands by stoking Islamaphobia. This time, let's be wiser, come together as Muslims and non-Muslims more closely than ever before, and brightly shine the light of the world we're building.

From a place of love, we might begin to listen to our brothers and sisters among Muslims that have lent ISIS some support. First and foremost those Sunnis from Syria and Iraq, who have been treated unjustly by Iraq's government, and incredibly brutally oppressed by Syria's dictator Al Assad. We might begin to understand that when we failed to offer their families protection and relief from the horrors they faced, ISIS offered that protection, and some accepted it. We might focus on learning from this, and offering them a better deal.

With that lesson, we might see the stories of the peoples around the world that ISIS fighters come from. From Chechnya, where generations of Muslim families were horrifically murdered by Russian military while the world looked away. Or from Egypt, or Algeria, or dozens of other countries, where sickeningly brutal state security police have tortured and murdered countless Muslims who dared to stand up to their venal corruption - something that is a religious responsibility for Muslims.

And maybe then we will understand that while ISIS is a monster that we must defeat, the monster is more than just the group itself. It's the desperation of millions of people suffering under horrific conditions, and looking for a way out. And the rest of us in the human family, Muslims and non-Muslims, have either looked away, failed to effectively address, or often, backed and supported these horrors.

So let's seize this moment with wisdom, to bring down the monster we face, the one we all have lines of responsibility for. Let's see the human family united like never before to defeat ISIS - not just on the battlefield, but in our own societies, in the media and social media, and most of all in the thousands of Muslim communities that live today around the world in fear.

Let's encourage Muslim and Non-Muslim communities everywhere to embrace each other, welcome refugees with compassion, escalate our pressure on Egypt and other brutal governments to stop brutalizing opponents and creating the ISIS' of the future, redouble our efforts to achieve a peace deal in Syria, protect at-risk communities like the Rohingya, stop the US' constant terrifying drone attacks on communities, and ensure that the military actions we support are scrupulously careful to avoid traumatizing the civilians who are suffering enough already under ISIS' boot.

If we do these things, we'll do far more than defeat ISIS, we'll defeat the misery that has given rise to them, and in a way that takes the human family one wiser step further on our journey together.