Europe just took an extraordinary vote, refusing to grant Monsanto a license for its main product and cornerstone of its empire - the cancer-linked weed killer glyphosate.

Monsanto thought renewal of glyphosate was a done deal. But now, after over 2 million of us joined the biggest global petition against glyphosate ever and massive targeted public pressure, the future of the Monsanto model is more in question than ever before.

Together we forced this from a formality for a new 15-year license into a heated political debate that ended up as a vote on an 18-month emergency extension. This week, European nations rejected even that.

Leading EU parliamentarian Pavel Poc just said: “Avaaz is indisputably the driving force of the fight for glyphosate discontinuance." Here’s what we have done together to make what seemed impossible, possible:


Going National - Winning Champions One by One 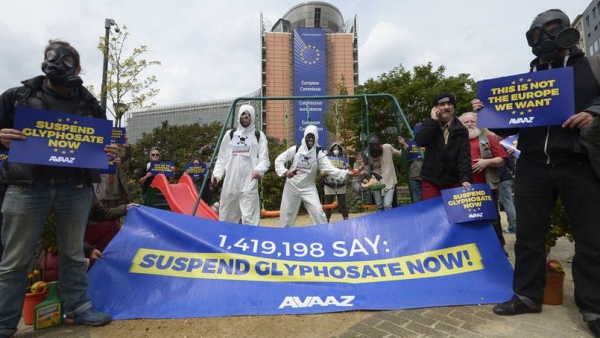 Avaaz action in Brussels on the day of the Standing Committee meeting.


When it came down to the final vote, all our work paid off - leaders representing half the EU population refused to authorise glyphosate, even for the trimmed down 18-month proposal we had helped reduce the license to!

All of this effort was funded by over 86,000 Avaazers worldwide who donated generously to make this campaign mega.

Throughout this fight, Avaaz was joined by great allies and partners who played invaluable roles. Our view is only partial, but here’s our top list to express gratitude to:


When we launched this campaign a year ago we were told there was no way we could win. This week’s vote is a key victory for our community’s tenacity, for the people of Europe, for independent science, and it is a crucial step towards our whole world's food future!

Without the support of EU governments, the Commission should act with precaution. Even if it renews glyphosate's license for 18 months pending further science, we will keep fighting to ensure the review is independent.

While the battle to get glyphosate out of our parks, playgrounds and fields is far from over, this powerful step takes us closer, and our movement has played a key role in it. For the sake of our health and our planet, let’s keep up the fight until we win.