To the ANC Council, the South African Government and legislators:
As citizens across South Africa, we call on you to protect our Constitutional commitments to accountability, freedom of information and the press, and to reverse the secrecy measures in the "Protection of Information" Bill and the "Media Appeals Tribunal". We urge you to ensure that intelligence agencies are held to account by public scrutiny, that secrets with a bearing on national security are determined by an independent panel appointed by Parliament and limited to the security sector, and that legitimate whistleblowers are always protected. We ask that any media tribunal be established as an independent body that is self regulatory. Our democracy was hard-won, and we will not give it up lightly. 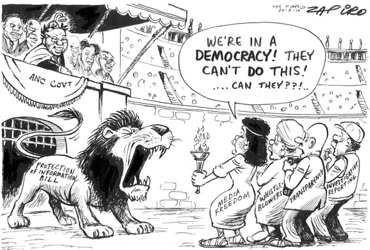 Zapiro's cartoon about the ANC's media proposals
© 2010 Zapiro - Printed with permission from www.zapiro.com
South Africa's democracy is at risk -- a draconian and unconstitutional new secrecy Bill is in Parliament and a Media Tribunal could be endorsed by the ANC, muzzling the media and letting the security agencies operate without accountability.

The secrecy measures in the "Protection of Information" Bill and the "Media Appeals Tribunal" proposal threaten press freedom enshrined in the Constitution and will block the media acting in the public interest to expose corruption and abuse of power.

Only massive pressure from citizens across South Africa can stir the ANC to reverse these proposals and preserve hard-won freedoms. Let's make the citizen's outcry too loud to ignore. Sign the urgent petition, and then forward this message to everyone.