To President Obama, President Erdogan, President Hollande, PM May, and other world leaders:

As citizens around the globe horrified by the slaughter of innocents in Syria, we call on you to enforce an air-exclusion zone in Northern Syria, including Aleppo, to stop the bombardment of Syria’s civilians and ensure that humanitarian aid reaches those most in need. 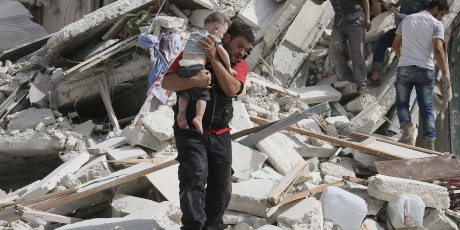 100 children have been killed in Aleppo in the last few days.

There is no easy way to end this war, but there’s only one way to prevent this terror from the skies -- people everywhere demanding a no-fly zone to protect civilians.

Let’s build a resounding global call to Obama and other leaders to stand up to Putin and Assad's terror. This might be our last, best chance to help end this mass murder of defenceless children. Add your name.

For years we have watched barrel bombs and chemical attacks. But the all out destruction of Aleppo is a new level. All deals and rules are broken. A quarter of a million people are trapped in eastern Aleppo with almost no access to food, medicine, or clean water. 100,000 are children!

There are no good options to end the war in Syria. But inaction is the worst one. A no-fly zone will mean that an international coalition can threaten to down planes that try to bomb Northern Syria. Almost 70% of Avaaz members support it. 5% oppose. Hesitation to use force to protect people is understandable and wise. But imagine it was our kids being bombed, what would we want the world to do?

A long-term ceasefire and a negotiated political solution is what we all want. But every effort so far has failed. Aleppo proves that any solution needs to start by protecting civilians. A no-fly zone, done well, might not cost a single life, and will save many. And genuine peace negotiations will be even more likely if Syria's ruler Assad and Russia know the world is serious.

Let’s tell Obama and all our leaders that they can’t meet this slaughter with words any longer. That their inaction means complicity. The fate of these families is hanging by a thread, and they need us to speak out, now!

Our movement has opposed military action many times. Our founding campaign was opposing the Iraq war, and we've repeatedly campaigned against the West’s often cynical engagement in the Middle East. But 400,000 people have died in Syria. It is a stain on the conscience of all humanity. A no-fly zone is the only decent thing to do in this awful situation. And it won't happen without the US. Let's join together to call on Obama and others to save the children and families of Aleppo.