To Prime Minister Putin and President Medvedev:
We urge you to take strong action to protect Russia's women and girls from the rape trade by signing the Council of Europe Convention Against Trafficking in Human Beings. Working together with other countries, Russia can play a key role in ending this horrific trade forever. 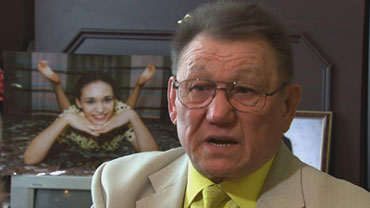 Oxana's father Nikolai is appealing to Russian Prime Minister Putin to stop the trade that claimed his daughter
The father of a victim of the rape trade has sent a moving appeal to Avaaz:

"My daughter Oxana was a beautiful, wonderful girl, gifted in languages. She left our home when she was 20 to take her dream job as a translator in Europe. We were so happy for her. 3 weeks later the police told us she died falling from a 5th story window, trying to escape men who fooled her with the job and forced her into a sex club. I died when she died. Now I live only to stop this from happening to other girls. Please, help me."

A powerful new treaty is our best weapon against the global rape trade in women and girls. If Russia signs it, it will put a major dent in this horror - let's get 1 million voices to appeal to Russian PM Putin to sign the treaty and help protect girls like Oxana: