To the President of the DRC, Mr. Félix Tshisekedi, the Minister of Environment Ms. Ève Bazaiba, and the Hydrocarbons Minister, Mr. Didier Budimbu:

Respectfully, we call on you to review the plans to extend oil fields in the DRC's precious rainforests and peatlands, particularly those that extend into Virunga National Park. Virunga has been a beacon of conservation, and we cannot afford backpedaling on the protection of the environment amidst such a crisis of mass extinction. We urge you to drop any plans to drill in the region, and keep the promises made at the last UN climate summit of protecting the forest for the next generations. 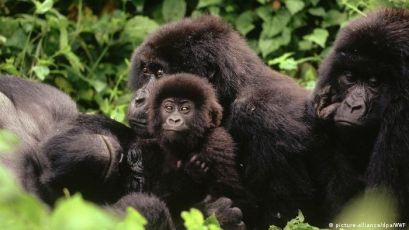 In days, the Congolese government is poised to run a major auction of oil fields that extend into Virunga National Park, a UNESCO world heritage site home to a third of the Earth’s last mountain gorillas.

People on the ground are fighting back -- and we can help them!

Just months ago, the president himself signed an agreement during the UN climate summit to protect the forest for 10 years, but is now resorting to oil as a way to fund the country's growth – despite the money pledges to help them protect the rainforest!

The Congo basin is the only major rainforest that sucks in more carbon than it emits! A major campaign helped stop oil and gas exploitation in Virunga years ago, and with our massive community of millions we can do it again, shining a light on this new shady deal that could endanger all life in it.

We have very little time to draw the world’s attention to this -- sign the petition now and share with everyone. Once we have enough support, we'll hit the Congolese government with ads in global media outlets to ramp up the pressure.