A Solution for Syria

To US President Obama and President Rouhani of Iran:

As citizens around the world horrified by the slaughter of innocents in Syria, we call on you to put aside your differences and meet to find a diplomatic path forward that brings all parties to the table to negotiate a ceasefire and peace. You are in a unique position to help broker such a solution. There must be a bold diplomatic breakthrough. We are calling on you to create one and start saving lives. 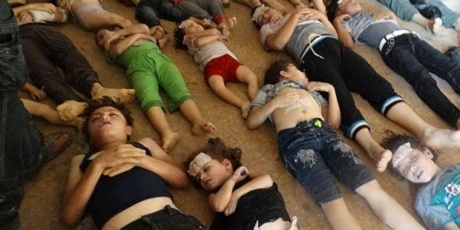 Just weeks ago the kids in this image were gassed to death in their sleep, but it feels the world has forgotten them and got stuck in a debate between US strikes or doing nothing. Now there is a glimmer of hope for a peaceful way to stop these massacres.

Syria's bloody war has been fuelled by rivalry between Iran, Assad's main backer, and the US and their allies. But this vile chemical attack has changed their discourse: Iran’s new moderate president condemned the gassing and Obama signalled he'd work with "anybody" to resolve the conflict. Let's urgently call on both leaders to sit down to talks and bring the warring parties together before any more lives are lost.

Right now, the global drums of war are beating over Syria, but if enough of us make sure Rouhani and Obama know the world wants bold diplomacy, we could end the nightmare for thousands of terrified Syrian children under threat of new gas attacks. We have no time to lose. Join this urgent call now -- when we reach one million signers we will deliver the petition directly to the two presidents.