Europe: our best hope for Syria

As citizens horrified by the slaughter in Syria, we call on you to act urgently to do everything in your power to protect Syrian civilians, to ensure those that perpetrate war crimes are held to account, and to push for a ceasefire and a bold diplomatic agreement to stop the carnage. 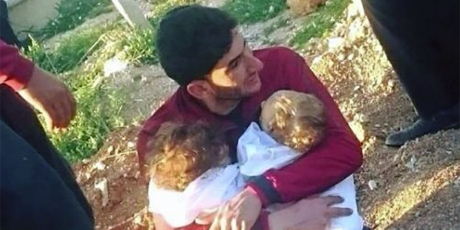 Abdel Hamid, a Syrian father, cradles his two dead baby twins, reportedly gassed to death with chemical weapons by the Syrian regime -- just days after Trump officials said the US will no longer go after President Assad as a war criminal.

The regime that has murdered, tortured, starved, and raped hundreds of thousands of its own people, now feels it can slaughter its way to victory, get off scot free, and stay in power.

One bloc can stop that -- Europe.

The EU is deciding right now what to do on Syria, and there are rumours some countries could push for a ‘deal with the devil’. But if enough of us demand Europe's leaders lock up the monsters who commit these crimes, it could be the only threat that stops more murder. Sign now to urgently call on Europe to act.