As global citizens concerned by the tragic decline in shark populations, we call on you to vote yes on the Shark Fin Elimination Act to ban the sale and trade of shark fins in the United States. 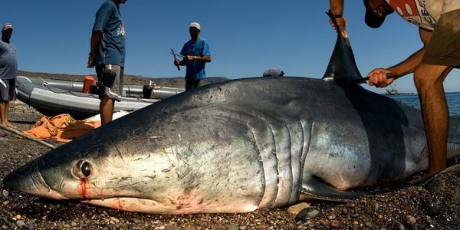 70 million sharks are getting killed each year to make soup of their fins. The process, known as shark finning, is extremely brutal -- it involves cutting off the shark’s fins then throwing it back into the ocean to die a slow and painful death. But now we have a chance to protect the sharks and deal a blow to the bloody trade.

Despite a ban on finning in the United States, shark fins are still allowed to be bought and sold in the country, and the demand is staggering. But a new bill that would ban the trade across the country was introduced days ago, and a massive wave of global public pressure now can show Congress members that the world is counting on them to save the sharks.

This is urgent - a quarter of the world’s sharks are already threatened with extinction, and a ban on the trade in the US would send a message to the world that this cruel process must stop. Sign the petition now and share widely -- when enough of us have signed we will work with partners and allies and deliver our voices to Congress.