The evidence is overwhelming that WhatsApp has become a weapon of mass democratic destruction. We demand, for the sake of the futures of your children and ours, that Facebook/WhatsApp immediately install disinformation protection for all WhatsApp users, and make encryption optional so that users can choose to assist efforts in monitoring disinformation. You must delete all fake and fraudulent accounts and correct fake news circulated on your platform. If you will not act, we call on regulators to do so. 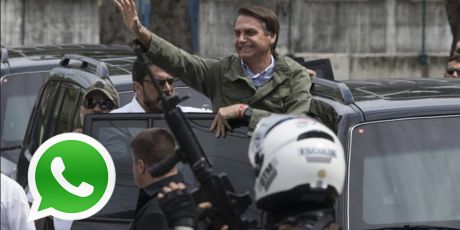 Brazil just elected Jair Bolsonaro President, a man who praises torture, told a fellow congresswomen “I will not rape you because you don’t deserve it”, and threatens to kill 30,000 leftists.

How could this insanity happen when just weeks ago over 60% of Brazilians said they would NEVER vote for him?

Mark Zuckerberg could have quickly cleaned up this act. He could have AT LEAST sent an apology to all the innocent citizens who received these mass lies telling them they were victims of illegal psychological and information warfare, and set the record straight.

Instead, he watched silently, and Facebook profited, as another democracy was hacked to death.

Now, with another Facebook Fascist rising to power, this is our moment to shame Facebook and Whatsapp into acting to inform citizens, families and communities when our accounts have been hacked by disinformation - sign the petition and Avaaz will blanket Silicon Valley with our message.