Wildlife trafficking is estimated to be a  multi-billion dollar  business that is cruelly harming animals,  endangering species, negatively impacting entire ecosystems, creating fertile ground for the next pandemic, and harming local communities.  Facebook, with more than 2.9 billion monthly active users, is a major enabler of this trade. In 2018, the company joined the Coalition to End Wildlife Trafficking Online with, at the time, the aim of reducing the illegal online wildlife trade by 80 percent by 2020. But four years on, research shows that Facebook remains a thriving online marketplace for wildlife trafficking.

Avaaz’s research – representing only the tip of the iceberg – underlines the need for immediate action from Facebook on this issue:
Social media has played a major role in the creation of a vast and easily accessible online market for wildlife, where traffickers exploit the global reach and relative anonymity of platforms to reach new customers and evade detection – facilitating an often deadly trade. Avaaz’s new research findings are consistent with research published by the Alliance to Counter Crime Online (ACCO) in 2020 showing substantial wildlife trafficking activity on Facebook, indicating that Facebook has failed to take adequate action to date despite being made aware of the shortcomings of their wildlife trafficking policies by ACCO and other advocates, and despite joining the Coalition to End Wildlife Trafficking Online in 2018.

Facebook has rolled out alerts to warn its users about potential wildlife trafficking content when they search for certain keywords, and it removes some suspicious content. For example, recently Facebook and Instagram took down several pieces of wildlife trade content when alerted by BBC News of new research. In response, parent company Meta said: "We prohibit the trading of endangered wildlife or their parts. Meta is a dedicated member of the Coalition to End Wildlife Trafficking Online. And through our partnerships with the likes of WWF [the World Wide Fund for Nature] and [wildlife trade specialists] Traffic, we are committing to tackling this industry-wide issue."

However, despite its explicit commitment, Facebook’s lax enforcement of its own wildlife trade policies, its  alleged reluctance to share information with law enforcement and others, and its amplification of wildlife trafficking content through its algorithms   appear to be major obstacles to progress towards ending the trade.

This new research by Avaaz shows once again that the company’s actions at present are insufficient to tackle the problem, which is why the following policy recommendations are so crucial. Facebook and other social media platforms should:

In just two days, Avaaz researchers collected 129 posts containing potentially harmful wildlife trafficking content. This content consisted of posts seeking to buy or sell species listed in Appendix I or II of the Convention on International Trade in Endangered Species of Wild Fauna and Flora ( CITES ), an international agreement that aims to ensure that international trade does not threaten the survival of species of wild animals and plants. Species listed in Appendix I of CITES are those currently threatened with extinction and species listed in Appendix II are at risk of becoming threatened with extinction if trade is not closely controlled – in other words, “species about which, based on international agreement, there is reason to be concerned” and the trade of which should be either prohibited or subject to strict rules and conditions.

Despite the internationally recognized and agreed need to protect these species, researchers were able to find 129 posts in a matter of clicks, using the Facebook search bar. Researchers had no previous investigative knowledge of wildlife trafficking, therefore their experience demonstrates how easy it is for average users to access potentially harmful wildlife trafficking content through Facebook’s platform. Furthermore, Facebook removed just 43% of posts containing potentially harmful wildlife trafficking content after these were reported by researchers using Facebook’s ‘Report post’ tool, evidencing a clear need to improve its moderation efforts. 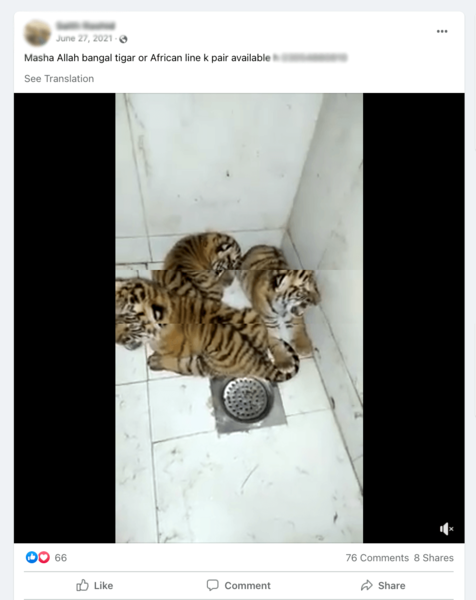 This advertisement for tiger cubs was posted to a public group on Facebook in June 2021. Tigers are listed in Appendix I of CITES. They are considered to be endangered, with just 3,900 estimated to be left in the wild. WWF identifies commercial captive tiger breeding as a “significant obstacle to the recovery and protection of wild tiger populations because they perpetuate the demand for tiger products, serve as a cover for illegal trade and undermine enforcement efforts.” 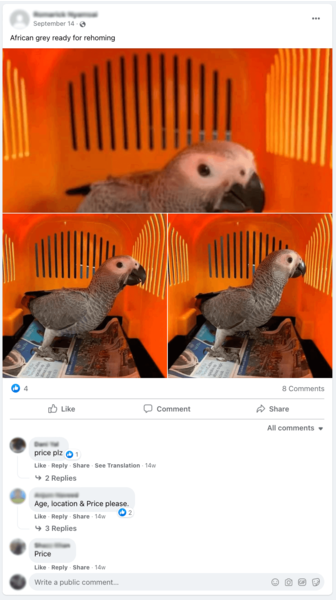 In the post above, a seller states that an African gray parrot is available for “rehoming” – a code often used by traffickers to indicate that an animal is for sale, confirmed on this post by prospective buyers asking for a price. African gray parrots are listed in Appendix I of CITES.

Sociable and highly intelligent, African gray parrots are one of the most popular pet birds in the world. Their friendly nature also makes them easy targets for poachers. The high demand for African gray parrots, in conjunction with habitat loss, is pushing the species towards extinction. They have been marked as endangered on the IUCN’s Red List of Threatened Species. 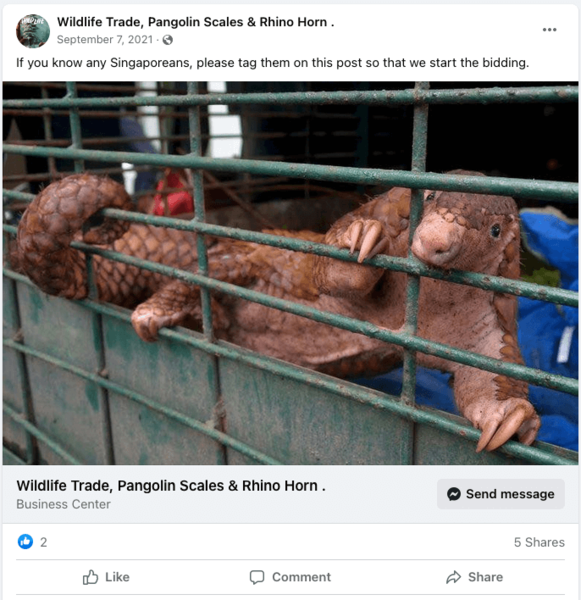 This post, found on a Facebook page that specializes in the trade and export of “Pangolin Scales & Rhino Horn to Vietnam, China, Hongkong, Malaysia, Singapore from Africa,” puts out a call for bidders on their animals and products.

Pangolins are a CITES Appendix I species. Despite the CITES ban on international commercial pangolin trading, which entered into force in 2017, pangolins are the most trafficked mammals in the world. They are trafficked most often for their meat and scales, which are used in traditional medicine and leather products. This trade directly threatens pangolin survival – all eight species of pangolin are protected under national and international laws, and two are critically endangered.

Similarly, international trade in rhino horn is illegal under CITES, but high demand for rhino horn in Asia leads to the poaching of three rhinos per day on average in South Africa alone. Black rhinos, a main target for poachers, are critically endangered, with only 5,600 left in the wild. 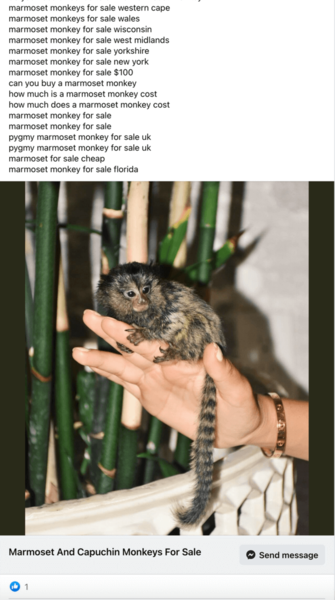 Posted on a page titled ‘Marmoset And Capuchin Monkeys For Sale’, this post features a photo of a pygmy marmoset under a list of keywords meant to attract potential buyers in various countries. Pygmy marmosets are listed on CITES Appendix II.

Native to the Amazon region, pygmy marmosets are among the smallest primates, with adults weighing just four ounces when mature. They are often sought as pets for their size and appearance. For this reason, the pet trade is the largest threat to this species’ survival – they are increasingly threatened by international demand for so-called ‘thumb monkeys.’ 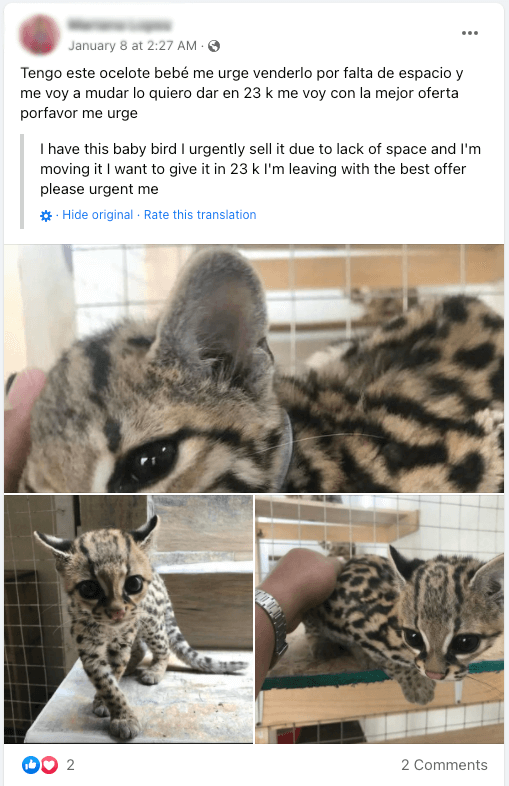 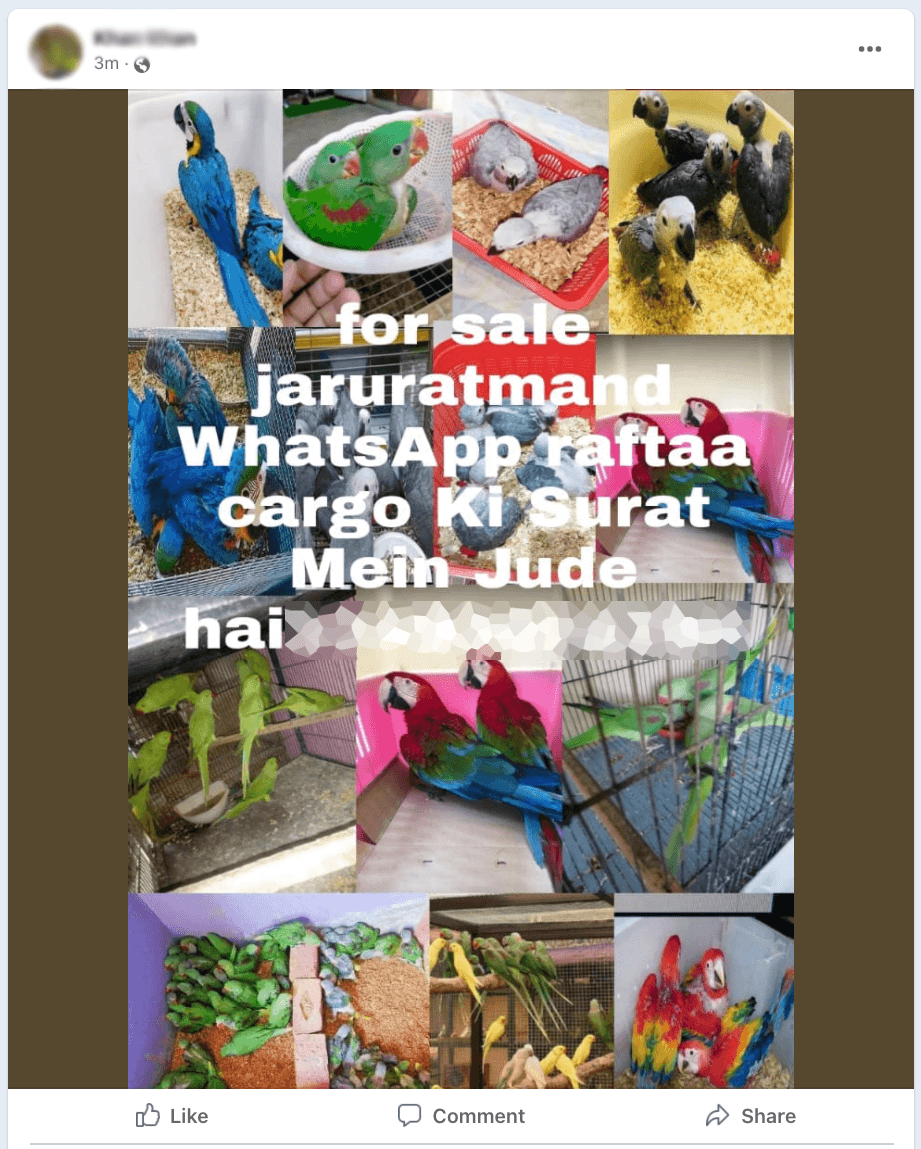 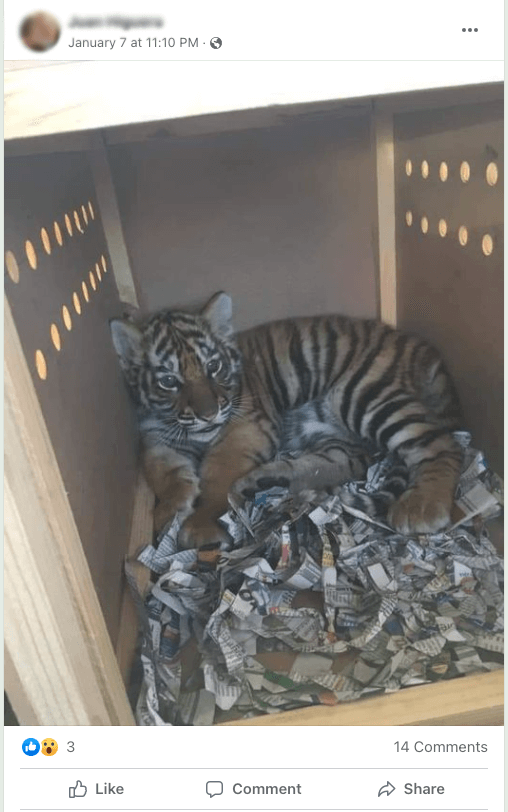 By promoting potentially harmful wildlife trafficking content to users through their recommendation systems, Facebook allows traffickers to reach a wider audience than they would otherwise, and creates the conditions for users with a casual interest in wildlife to be dragged into an international wildlife trafficking rabbit hole.

Section 3: What Facebook and law- and policymakers can do

As mentioned above, Facebook has already taken some actions aimed at tackling wildlife trade on its platforms. In 2018, the company joined the Coalition to End Wildlife Trafficking Online. It has adopted a number of policies related to the trade in endangered and live non-endangered animals. Facebook also began to include alerts to warn its users about potential wildlife trafficking content when they search for certain keywords. But its efforts to date clearly do not match the scale of the issue. Wildlife experts say that more can and must be done by the platform and that its policies ought to be enforced not only more consistently, but also across all languages – because research shows that Facebook’s policies are enforced sporadically, particularly in languages other than English.

While there is no silver bullet to fix online wildlife trafficking, there are a number of policy and tech solutions social media platforms and policymakers can adopt in order to prevent its spread – and they enjoy the support of around 700,000 people across the world.

Meta (including its platforms Facebook and Instagram) and other social media companies should: Law- and policy-makers should: