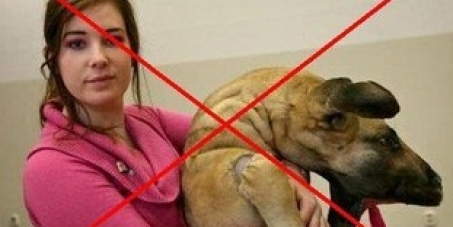 Stop Katinka Simonse from killing animals in the name of art

وقعوا على هذه العريضة
أطلق
Little B.
هذه العريضة الموجهة إلى
Dutch government’s,
Netherlands State Senate,
Netherlands Animal Rights Party
Katinka Simonse, a 31 year old female living in Amsterdam, has been mutilating and killing innocent animals and getting away with it.
These horrible acts have been looked over because she killed these animals in the name of “Art”.
She owns many animals and keeps them in horrible conditions.

Katinka has caused outrage amongst animal rights supporters globally. She put 100 hamsters in tiny transparent plastic balls and made them run around a gallery, she threatened to put baby chicks through a shredder, she writes numbers on snails in her garden to keep track of them, she butchers dogs and dismembers them and she kills chicks and puts hooks in them in order to hang them up, Apparently, the hamsters were removed from her

In 2004 Katinka Simonse killed her very own cat and then made it into a handbag. There was some confusion on how she went about with the killing, but in an interview with the Dutch TV program, De Wereld Draait Door (The Turning World), Simonse clearly shows no remorse for her actions towards the cat and openly demonstrates to the interviewer how she broke the cat’s neck. She laughs her way through the interview.

:Here you can see her videos and her page
( Warning : harsh Graphic content )
https://www.youtube.com/user/looovetinkebell/videos
http://looovetinkebell.com/page/2

Or Simply entering her name or her alias into any search engine such as Google, will reveal the myriad of atrocities that she has committed against the animal kingdom in the name of her art form.

Although she is not being charged by police, she has angered a good part of the animal loving world and definitely will be charged by them.

I am writing to request that you bring Katinka Simonse to justice and put a strong sentence to her in jail. She is barbarically taking the lives of innocent animals so she can flourish in her art career. Her acts were evil, inhumane, and were in violation of the law.

In Section C of the Treaty of Amsterdam, in the Protocol on the Protection and Welfare of Animals, it states that , “THE HIGH CONTRACTING PARTIES,
DESIRING to ensure improved protection and respect for the welfare of animals as sentient
beings,
HAVE AGREED UPON the following provision which shall be annexed to the Treaty
establishing the European Community,
In formulating and implementing the Community's agriculture, transport, internal market and
research policies, the Community and the Member States shall pay full regard to the welfare
requirements of animals, while respecting the legislative or administrative provisions and
customs of the Member States relating in particular to religious rites, cultural traditions and
regional heritage”

The Protocol is important because it recognizes animals as “sentient beings,” and because it requires the Community and its Member States, in formulating and implementing the Community’s policies on agriculture, transport, the internal market and research, to pay “full
regard to the welfare requirements of animals.” Therefore, the EU has the responsibility to legislate to improve the welfare of animals, to prevent cruelty to animals and mistreatment in areas covered by the Treaty.

This means that Katinka’s acts were completely illegal and in violation of this protocol. This calls for Katinka to be brought to court, and sentenced with animal cruelty and abuse. I and many others are urging the government make a change.